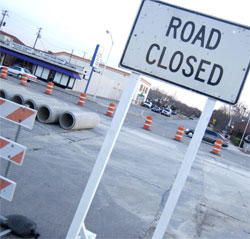 Students and local residents can expect at least another 18 months of construction on and around Berry Street as Fort Worth moves toward an entire reworking of the TCU area.The construction is part of the Berry Street Initiative and a larger effort to transform Berry Street into the “college community fabric,” said Fort Worth City Council member Wendy Davis.

“We want to create a pedestrian environment,” Davis said.

The current six lanes of traffic will be reduced to two lanes in either direction, separated by a tree-lined median, Davis said. Also included in the construction plan, she said, are tree-lined sidewalks and parallel parking spaces.

Tony Sholola, engineering manager for the city’s engineering department, said the finished product will contribute a “much nicer entrance to the campus.”

The construction plan began more than a year ago with underground improvements to sewer and water lines, said Davis.

The current work is expected to last between 18 and 21 months and will strictly involve roadway improvements, Sholola said.

Davis said the plan will cost the city about $14 million, with $4 million having already been raised.

“We’re about a third of the way through,” Davis said

“I think the work the city has done to slow down traffic will make it more pedestrian friendly,” Mills said.

Mills said he thinks students will always visit the north side of Fort Worth and downtown, but the current construction will help provide more convenient alternatives.

Rob Sorokolit, a freshman biology major, said he looks forward to the improvements.

Freshman history major Ryan Graham said the current construction doesn’t bother him yet, but Sorokolit said there is “an excessive use of orange pylons.