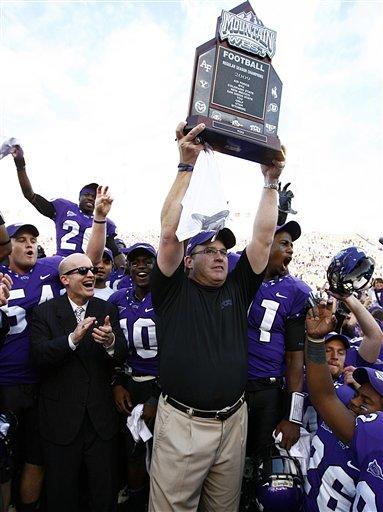 Big East, welcome to Texas. TCU, welcome to a little respect in the world of collegiate football.

For the Horned Frogs, this is a huge move that has significant positive aspects. By being a part a BCS automatic qualifying conference, the Horned Frog football team should get far more respect and recognition. West Virginia, Pittsburgh and South Florida turn out productive teams on a regular basis. Rutgers, Louisville and Syracuse have also shown they have the capability to be excellent football teams. Last year, Cincinnati went 12-0, made an appearance in the Sugar Bowl and was ranked third in the BCS standings.

The Big East may be having an off year right now, but the conference is still a solid one. Even in this not-so-great season, five of the eight teams that make up the conference have a winning record, and the current cellar-dwellers sits at 4-7. Compare that to the Mountain West, which only has four winning teams, including TCU, and a load of bottom-feeders like New Mexico (1-11), Wyoming (3-9), Colorado State (3-9) and UNLV (2-10).

The Big East offers a rich and competitive conference, one that the Mountain West won’t be able to compete with. Over the past 10 years, the Big East has gone 6-4 in BCS games, with a few national title appearances. The Big East as a whole has a better win-loss ratio than the MWC and has put its teams into better-paying bowl games.

When TCU moves into this great competition, they will become a consistent conference favorite. Because of that, expect TCU to see a lot of BCS bowl games with the new AQ status. Head football coach Gary Patterson will get a perfect tool for recruiting, and the Horned Frogs will get to permanently stamp their mark on the BCS system. Beyond all that, TCU will still receive better incentives from the Big East compared to what the Mountain West has to offer.

Practical benefits abound in the Big East. For the Frogs, revenue and television ratings will be significantly better than what the Mountain West garners. Because of a great contract with ESPN, the Big East offers better national markets. With a better market, more revenue will be shared throughout the conference.

According to the Fort Worth Star-Telegram, the Big East could get TCU upwards of $7 million more than what the Mountain West could. Marquee match-ups against Pitt and West Virginia will be great fodder for TV and bring TCU much deserved attention and credit.

The Big East may force TCU to travel quite a bit, but under the new Mountain West, TCU would have had to travel to games in Boise, Fresno, San Diego and possibly Hawaii. Those trips alone would add up to almost 7,500 miles in away game traveling. If TCU is getting better opponents, yet traveling the same distance for away games, why wouldn’t they switch to a BCS automatic qualifying league such as the Big East?

The move makes a lot of sense for TCU and will help the national profile of the team. Revenue will be increased, the Horned Frogs will no longer have to fight tooth and nail to get into a big game and the Frogs will get much more respect from the BCS system.

TCU will be a fantastic addition to the Big East. The Big East will love having the Frogs as well.