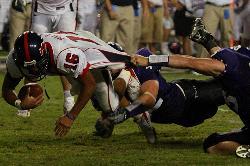 Listen to the press conference

After spending two years in Dallas, the Frogs have brought the Iron Skillet back to Fort Worth.TCU capitalized on big plays on defense and special teams en route to a 21-7 win against SMU on Saturday night.

Redshirt freshman Andy Dalton and sophomore Marcus Jackson split time at quarterback against the Mustangs. Head coach Gary Patterson said he had been planning on using both quarterbacks before the game, but Jackson proved to be tougher matchup for SMU.

“Marcus was the guy for the job tonight,” Patterson said. “Tonight we needed a quarterback who could really get away from some things.”

Patterson said there is no animosity between the two signal-callers, and he recognizes that each has his own strengths and weaknesses.

“I think it’s good for them to be honest with you,” he said. “They’re both young and it’s good to compete.”

Jackson said he has no problem with the two-quarterback offense.

“I think we have to do whatever works and whatever will help our team,” Jackson said.

This game also featured the return of junior running back Aaron Brown, who had been out with a leg injury since the Baylor game.

In his first game back, Brown finished with 92 yards on 11 carries.

Brown said the injury was tough for him because he wanted to come back and help his team during its recent two-game losing streak.

“With my mentality, I wanted to come back two weeks ago,” said Brown, “but I just listened to my staff and going on what they knew. I got up and came back tonight with no injury.”

The game started quickly for SMU thanks to a 15-yard run by junior running back DeMyron Martin on its second possession.

TCU would respond less than four minutes later with a blocked punt by redshirt freshman safety Colin Jones that was returned for a touchdown by freshman wide receiver Bart Johnson.

The Frogs would benefit from another big play early in the second quarter as junior linebacker Robert Henson returned a Willis interception for a 58-yard interception return for a touchdown.

Later in the quarter, Jackson worked his magic and led TCU to its first and only offensive touchdown of the game in the second quarter.

With Jackson under center, the Frogs were able to march the ball 78 yards during 16 plays ending with a 15-yard touchdown pass from Jackson to senior wide receiver Derek Moore. The second-quarter score turned out to be the final score of the game.