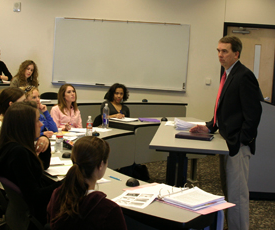 Though a new bill passed by the Texas Legislature only currently affects public universities, professors at TCU and the University of North Texas said they think it could interfere with an instructor’s right to choose his or her own curriculum.

TCU political science professor James Riddlesperger said that while the university, as a private institution, is not affected by the bill, the bill’s overall effect is that of a double-edged sword,

It specifies that information posted must be no more than three links away from the school’s home page, and must be accessible without a user name or password.

The writer of the legislation, university alumnae and state Rep. Lois Kolkhorst , R-Brenham, said in a Dallas Morning News article that the bill will be a great tool to help the consumer.

In light of a sharp increase in the price of tuition, it is very important to have transparency, she said.

Riddlesperger said he believed students would benefit from knowing more about professors when they take their classes. However, a professors’ hesitance to publish such information as syllabi and curriculum vitae is not without merit, he said.

“What is troublesome is when it begins to sound like [the state] is trying somehow to guide the substance of what professors do or their academic freedom,” Riddlesperger said.

The bill is the first of its kind in the nation, according to a Dallas Morning News article.

According to the Texas Conservative Coalition website, it is meant to help families make a more informed choice about course registration.

Matthew Eshbaugh-Soha, a political science assistant professor at UNT, said that while the legislation is said to be for parents and prospective students, he wonders who the information is really for. A big worry of faculty academics is that the bill the first step in more government involvement, he said.

Eshbaugh-Soha said he and a majority of his colleagues already post their syllabi and curriculum vitae online. The only difference now is the extra hurdle that says professors have to put information in a specific location, which will increase website costs, he said.

According to an article in the Dallas Morning News, other Texas professors said the legislature attempts to interfere with higher education curriculum. Professors interviewed in the article said they believe cultural conservatives would target specific classes and professors based on course content they view as undesirable.

Riddlesperger said he understood the concern, and that he believed introducing controversial topics was simply a part of learning.

“I always tell my students that if I don’t say something that offends people during the course of the class then I’m not doing my job…we learn by engaging ideas, even abhorrent ideas,” Riddlesperger said.

Similarly, Eshbaugh-Soha said somebody could take information on the syllabus out of context because a syllabus usually isn’t the meat of a lecture.

Riddlesperger said he believes there is a high probability the law will interfere with the curriculum. People have to keep in mind that Texas is a conservative state with a conservative political culture and legislators are on a majority vote, he said. They appeal to that conservative prospective and don’t have any incentive to protect academic integrity, he said.

Eshbaugh-Soha said the legislation could also potentially cause funding cuts for courses of which the state does not approve.