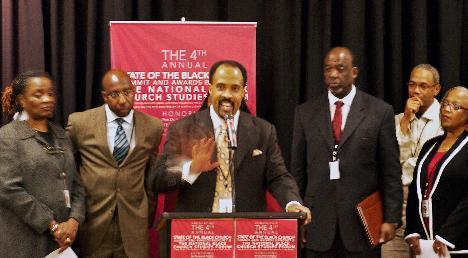 DALLAS – The Brite Divinity School continued to defend the decision it made a year ago to honor the Rev. Jeremiah Wright at a press conference Friday at the Friendship-West Baptist Church.Stacey Floyd-Thomas, director of black church studies at Brite, said Wright, like Martin Luther King Jr., represents the black church tradition in his harsh denunciation of social problems affecting the country, and said Wright’s harsh criticism does not make him unpatriotic.

“Standing in the rich tradition of the African-American church, if he [Wright] is guilty of anything – this loving father, this prophetic pastor, this former U.S. Marine – is guilty of loving the United States enough to tell the truth,” said Floyd-Thomas, who teaches ethics at Brite.

Wright was scheduled to participate Saturday in two events at Brite’s Black Church Summit, but he canceled his appearances at the summit Wednesday citing security concerns. Wright also canceled appearances at the Wheeler Avenue Baptist Church in Houston and the Bible-Based Fellowship Church in Tampa, Fla.

About 130 people had registered for the Saturday evening event as of Thursday, Brite spokeswoman Ruth Cogswell said. The event remains open for registration and costs $125 per plate.

The Rev. Frederick Haynes, pastor at Friendship-West, said the church worked with the Dallas Police Department to ensure security was adequate, but said Wright canceled his appearance because he was concerned about the extent the church had to go to host him.

Haynes said the public does not understand the context of Wright’s comments because the press has reduced the black church to a stereotype.

“We recognize that the body of the work of Jeremiah Wright Jr. is not limited to a sound bite that has been taken out of context for the political pretext of those who have agendas that are contrary to the healing of our nation,” he said.

A close friend of Wright, Haynes said Wright said during a phone conversation Thursday night that he and his family are hurt by the media’s portrayal of the controversial pastor.

“I think what’s been lost is that he is very human,” he said.

More than 15 black church scholars joined Floyd-Thomas and Haynes in their defense of Wright.

The Rev. Raphael Warnock, pastor at the Ebenezer Baptist Church in Atlanta, said the public has confused moral outrage with hatred in response to claims that black preachers promote hate from the pulpit.

“In fact, it’s inappropriate not to feel outrage in the face of injustice,” he said.

Check back later for more coverage of the weekend events.

Watch the unedited video of the press conference