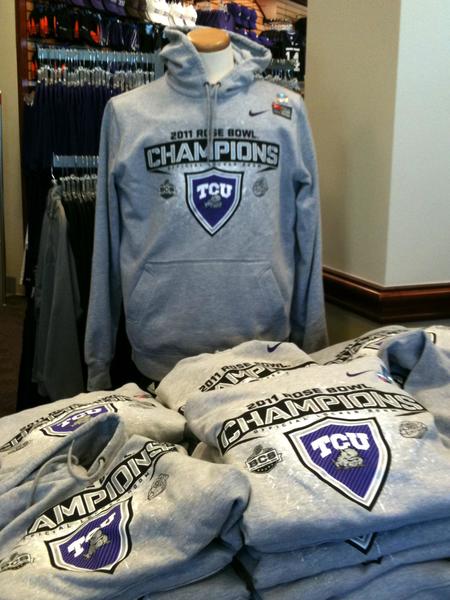 After TCU’s Rose Bowl victory over Wisconsin generated the highest overnight cable ratings on ESPN to date, thousands of fans headed to the TCU Bookstore for Horned Frog apparel.

Llisa Lewis, bookstore general manager, said about 4,000 people were in the store buying merchandise the first day it came in.

Lewis declined to provide sales numbers because it was private business information.

The first shipment of merchandise that arrived included gray Nike sweatshirts and hoodies, Lewis said. However the purple apparel was most in-demand.

Many shoppers requested shirts that displayed the Horned Frog holding a rose in its mouth or those that display “champions,” “undefeated” or “perfect season,” Lewis said.

Although sales around this time of year have always been successful for the bookstore, the outcome of the Rose Bowl caused sales to rise, Lewis said. She said she expected steady sales with students returning to campus.

Lewis said sales will continue to rise until the Rose Bowl celebration on Jan. 16 because Horned Frogs are proud to honor the football team.

“The world finally got to see what we’ve known all along 8212; that TCU is just a very special place,” Lewis said.

The Horned Frogs’ 21-19 win attracted more than 20 million viewers on cable television and received a 11.7 cable rating, which was the highest non-NFL overnight rating since ESPN ratings began in 2001, according to an ESPN article. In comparison, the Fiesta Bowl match-up between Connecticut and Oklahoma produced a rating of 6.7, with almost 11 million cable viewers.

Junior economics major Lauren Wysoski said she watched the game on the big screen at the Hulen Movie Tavern.

“Anyone could come and watch,” she said. “It was a lot of fun. There were some older people there too, and it was loud in there but really fun.”

The Horned Frog victory also drew attention to the bookstore, as Rose Bowl merchandise arrived Sunday morning after the game.

Sophomore nursing major Ann Tran said she watched the game with her family in Fort Worth.

“I’ll get long-sleeve shirts and hoodies because it’ll be cold,” Tran said. “I’ll definitely be buying because we won the Rose Bowl.”