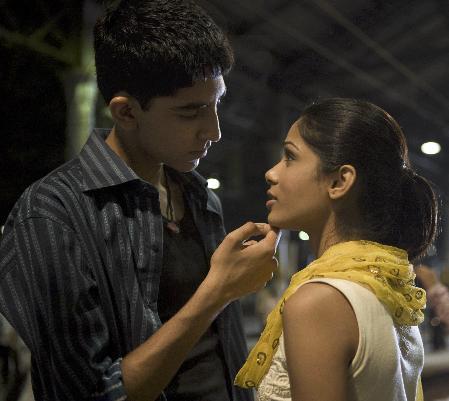 It’s the final question for a chance to win 20 million rupees in the Hindi version of “Who Wants to be a Millionaire?”

Ironically, 18-year old Jamal Malik (Dev Patel), the contestant of the TV show from the slums of Mumbai, never knew the answer to this question, taken from a well-known book which he once studied at school.

So, how did Jamal get the answer correct? Did he cheat or was it luck?

“Slumdog Millionaire” gives you the answer in bits and pieces.

The police arrest Jamal for interrogations because they don’t believe a slum dweller and less-educated person like him would be talented enough to answer the entire list of questions in the show. But the winner sits down and unfolds the hints of how he got his answers.

Each of Jamal’s life sequences is on his stairway to victory. The encounter with his favorite movie star to the escape from the slums due to a religious riot and his quest to find his lost love, Latika (Freida Pinto), are all clues to his chase for the grand amount.

“Slumdog Millionaire” takes the viewer to an exhilarating journey through India. Mostly shot in Mumbai, formerly known as Bombay, viewers see a piece of the life of poverty-stricken people in the slums, home to more than 1 million of the city’s 13 million souls of India’s financial capital. The movie also gives viewers a sense of how a breed of criminals could rise from hunger, and it also makes them believe in love.

Adapted from Vikas Swarup’s novel “Q&A,” director Danny Boyle brings ‘Slumdog’ to life with rich visuals of poor India and realistic performances from the cast. Compared to this British director’s past projects such as horror flick “28 Days Later…” or “The Beach,” starring Leonardo DiCaprio, this movie ascends above all.

Patel gives a first-class performance along with other cast members who are equally potent. A crowd of well-known Indian actors from Bollywood like Irfan Khan as the police inspector and Anil Kapoor as the game show host deliver their acting panache, marking their presence in the international film circuit.

A.R.Rahman, an eminent Indian musician, renders his tunes to the movie, which adds flavor and essence. The movie ends on a truly Bollywood note with a happy union and a song and dance sequence. But expect no smooches or explicit display of affection as in most Western movies.

“Slumdog Millionaire” is a story that tells the tale of thousands of people in Mumbai who live in poverty, abused and strayed like a dog. It’s a story of hope, survival and finding the real meaning on life – love.

If you want to know India inside and out, this 120-minute drama will take viewers across the cultural realms of the West. “Slumdog” will certainly give the audience who wants to break free from “Twilight” and “Quantum of Solace” a new taste.

So, the final question: Is “Slumdog Millionaire” A) a well-executed movie; B) worth buying a ticket; C) a quality movie-watching experience; D) a contender for the Oscars.

A winner all the way.

“Slumdog Millionaire” runs for 120 minutes and is rated R for some violence, disturbing images and language. Currently, it is playing at The Magnolia in Dallas and Angelika in Plano.