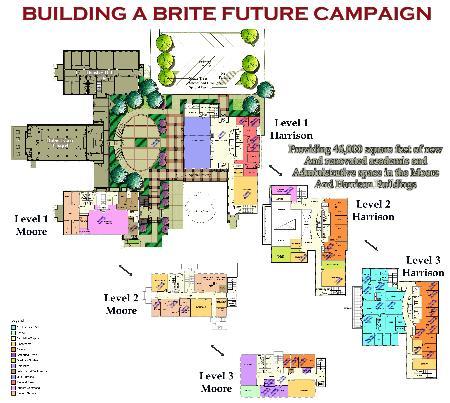 In the early 1980s, Newell Williams, then associate dean of Brite Divinity School, was sent on a mission to find more office space in the Jo Ann and Wayne Moore building.

After a trip up to the third floor, he found what he was looking for.

“I came to the third floor and saw a men’s room and I thought, ‘This is ridiculous, you don’t need a bathroom on every floor. If you want go to the restroom you just go downstairs,'” Williams said.

More than 20 years later, Williams, now president of Brite Divinity School, is still searching for space and often thinks, as he teaches his class on the third floor, about how nice it would be to have those restrooms back.

Construction of the Nell A. and W. Oliver Harrison building and the renovation of the Moore will create the space needed to allow the school to expand its student enrollment from 250 to 450 students, Williams said.

The building will replace the portable offices in the parking lot behind Beasley Hall, Williams said. Offices previously housed in the portables, such as anthropology,, criminal justice and sociology, will be relocated to Scharbauer Hall.

The Harrison building is named in honor of Brite graduate and trustee Oliver Harrison and his wife, Nell Harrison.

Construction of the Harrison building will cost about $11.5 million, and the Moore renovation project, which includes an elevator, will cost about $3.25 million, Williams said. In addition, about 25 percent of the $11.5 million construction project (about $2.88 million), will go toward the creation of an endowment to maintain the Moore and Harrison buildings, Williams added.

Currently, Brite pays the university $1 out of every $5 the school receives to cover the cost of maintaining the facilities, with the exception of Leibrock Village, Williams said. Leibrock Village, Brite student housing, operates out of a rental arrangement that is handled differently, Williams added.

Four years ago, the school started a five-year capital campaign to raise money for the building project, but because of the rising cost of construction, the school decided to start construction in June 2009 – a year ahead of schedule, Williams said.

The economic constraints of the school’s alumni were a factor in the school’s decision, Williams said. Divinity students graduate at mid-career level, making about $40,000 a year, he said.

“The building we want to build gets more expensive every year, and the pool for our donors for this project is finite and it’s not wealthy,” Williams said. “The economics of the situation seemed to dictate building what we could at this point with realistic expectations.”

So far, the campaign has raised about $11.5 million and needs to raise about $1.5 million between now and May, Williams said.

“We probably won’t be able to do that, but that we’ll do the best we can,” Williams said “Once we break ground, we will continue to raise money until we raise the full $14.75 million.”

Williams said the school would have to take out a short-term loan if it does not raise the money by June.

“The best script is that the cash flow will be adequate to cover the building expenses as we build the building,” Williams said.

Williams said TCU is helping Brite find space on campus to hold its classes and house faculty during the construction.

The meeting determined that 17 faculty members and about 20 administrators will need to be moved, Munson said.

No timetable has been set for when or how long offices and classrooms will have to be relocated, he added. Munson said there is no reason why Brite would have to relocate before the end of the spring semester.

Officials are looking into moving four Brite classrooms currently not a part of the TCU classroom scheduling system. This would affect the ability for Brite to hold classes on campus.

“I’m not sure we can do that based on our current classroom utilization,” Munson said. “We have ideas, but we don’t have a solution at this point.”

Munson said he was unable to share those ideas at this time.

If the university is unable to relocate classes, one of the options is to hold classes in local churches, Williams said. Several churches around the area, such as University Christian Church, have offered classroom spaces to Brite, Williams said.

Munson remains optimistic that by working together, TCU and Brite will find a solution.

“The end goal is to have a solution by the end of the semester, so my bet is we’re going to have two months of a lot of iterations and internal negotiations to find space that is appropriate,” Munson said.