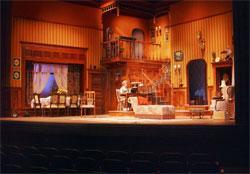 TCU’s University Theatre will be rededicated as the Jerita Foley Buschman Theatre after her leading gift of $550,000 in the $1.2 million theater “facelift” project, said Harry Parker, chair of the theatre department.Buschman was a TCU alumna who was involved in theatre as a student and continued to support the theater long after her graduation in 1946, Parker said.

Buschman was a great benefactor of the theater for many years, and then made this gift shortly before she died two years ago with the knowledge that the theater would be renovated in her name, Parker said.

Buschman’s daughter, Kristen Hicks, said her mother would have been thrilled to see the new theater.

“She would squeal and she would cry,” Hicks said.

LaLonnie Lehman, a theatre professor, said she is eager for the public to see the theater.

“When I looked at that new theater, it was just overwhelming – so beautiful, so updated, so wonderful. It just brought tears to my eyes,” Lehman said.

“I am so eager for our students and the community to see that theater and use that theater. What a wonderful gift she has given us.”

Parker said the Jerita Foley Buschman Theatre is the third name for the theater since it opened in 1949.

The renovations include a large acting studio on the third floor, four new faculty offices on the second floor and a lobby on the first floor, Parker said.

The interior of the theater also received renovations including all new seats, new carpet and new house lights, Parker said.

Parker said Lyle Dye, a retired professional theatre director, also donated a collection of vintage theater posters that now hang in the lobby, some of which date back to the 19th century.

Parker said the building did not have space for the growing music and theater departments and that the theater was becoming a bit run down.

“This was a chance to reclaim an older space and update it to make it more viable,” Parker said.

Parker added that the theater had a history, with more than 260 productions and hundreds of students acting on its stage since it opened.

Theatre patrons and students alike are excited about the new facilities.

Michael Cook, a junior theatre major, said the changes will be beneficial and he was excited that he would be here to enjoy the new amenities.

The official dedication event is Saturday and will include dinner at the Kelly Alumni Center for the benefactors and their families, a ribbon cutting and a closed performance of the Pulitzer-Prize-winning show “You Can’t Take it With You,” Parker said.

“The show is about an unconventional family who decides life is about relaxing and finding out what makes you happy,” Parker said.

Parker was an actor in the show in 1978 as an undergraduate at TCU. He is now directing this production.