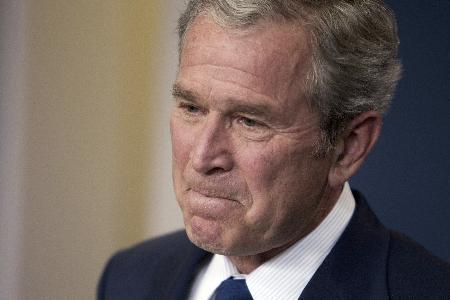 In his farewell address Thursday night, President Bush thanked the American people for giving him an opportunity to serve. But most Americans weren’t thinking, “You’re welcome, Mr. President.”

Closing his presidency with a 34 percent approval rating, according to a Gallup poll, Bush will leave as one of the most unpopular presidents ever, and there’s good reason for that.

For liberals, his embrace of faith-based programs, opposition to gay marriage and stem cell research and his traditionalist stances on social policies have left more than a sour taste in their mouths. For conservatives, his watch over unprecedented growth in government spending and national debt have left no sweeter an impression. His handling of the war in Iraq frustrated people in every corner of the political spectrum.

But despite his failures, Bush has done great things, and history will remember him better than his approval ratings now suggest.

Foremost of these was the president’s handling of the months following the terrorist attacks of Sept. 11. He guided and consoled the American people with strength common among great leaders in history. I dare say I have never been more proud to be an American than when he threw out the first pitch, a strike, at game three of the 2001 World Series at Yankee Stadium

You could say that was little more than a footnote in the grand scheme of things, but you have to remember the weight of the moment, and how badly our country needed something to cheer. In a time when our nation collectively felt more vulnerable than it had in more than five decades, Americans took solace in the fact that their president was a strong man with strong values. That is something for which we should all be thankful.

In Iraq, a country that once seemed a wasteland brought on by American arrogance, the desire for a free society burns brightly in the hearts of so many peace-loving people. Imagine that in a period of less than 10 years, a Middle Eastern nation could change from being gripped by the tyrannical hands of a merciless dictator to an imperfect, but genuine democracy.

Now that American and Iraqi officials took the final steps late last year to agree on the withdrawal of American troops by the end of 2011, that prospect is becoming a reality. That freedom comes at a very high price, but it is a price so many Iraqis and Americans were willing to pay.

None of it would have been possible if Bush would have caved when the war reached its lowest point, but the president never wavered from his resolve to spread freedom and defeat its enemies.

On this last day of Bush’s presidency and the first of Barack Obama’s, most of us will be glad to look forward and not back, embracing our new leader and hoping and praying he can help our economy rebound along with our position in the world. These are awfully high expectations for a new leader. To fulfill them in the least, Obama will need some of Bush’s qualities, qualities that Bush reminded us of in his farewell speech. Whatever your opinion of the 43rd president, he is a man of deep convictions and resolve – a man who wasn’t afraid to state moral absolutes.

“. [G]ood and evil are present in this world, and between the two of them there can be no compromise,” Bush said.

No matter which side of the political fence one stands on, everyone should hope Obama will have the courage to execute his vision from solid ground. May the new president know his absolutes and never be afraid to stand on them when times get tough.