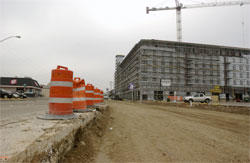 While heavy machinery rips up a quarter mile of concrete between Waits and McCart avenues, the effect on businesses has been mixed.The $3.03 million reworking of Berry Street, which began a month ago and is expected to last a total of 18 months, calls for tree-lined sidewalks, a wider median and parallel parking spaces in either direction, said Fort Worth City Council member Wendy Davis.

Jack Labovitz, owner of Kings Liquor, said he has seen a 10 percent drop in business revenue because of the combined effects of the GrandMarc at Westberry Place apartment complex and Berry Street constructions.

“It has hurt my business ever since the construction started,” Labovitz said. “It’s not a good situation.”

Both Hellman and Labovitz agreed the work is necessary.

“I think it’s a good idea to clean up (Berry) to keep people wanting to come back to this area,” Hellman said.

Beth Driskill, one of the owners of Outer Image, a salon on Berry Street, said she too, has seen a drop in business but could not say by how much.

Angelika Ketzler, manager of Outer Image, said the drop in business is because of blocked streets.

Ketzler said coupons were distributed in the neighborhood in an effort to counteract the slow business.

“I think Berry Street is old, and I think it should be modernized for the people around here,” Ketzler said. “I’m not mad, but it hurts us at the moment.”

Despite the blocked streets and orange pylons from Frazier to Cockrell avenues, some businesses are welcoming the redevelopment.

The construction currently knocks at the front door of Kubes Jewelers, a Berry Street fixture for more than 50 years, but one of the owners said the work doesn’t bother him.

“We’re not worried about it; we’re actually delighted,” Rick Kubes said. “We’ve been waiting for this to happen for 10 years.”

Kubes said he is honored to be a part of the change. He added that business has not changed since the beginning of the construction, explaining his customers are destination-oriented and will continue to visit.

“The minor inconvenience that it is does not affect our business at all,” Kubes said.

Tammy Rollins, general manager of Perrotti’s Pizza, said revenue has increased by at least two times, but could not explain why.

Rollins said she welcomes the redevelopment to make Berry Street safer for pedestrians.

Richard Perrotti, owner of Perrotti’s Pizza, was unavailable for comment at the time of printing for specifics on the increase in revenue.

The reconstruction is part of the Berry Street Initiative and is paid for by 30 percent of city funding and 70 percent of federal grants, said Mike Weiss, a professional engineer with the city of Fort Worth.