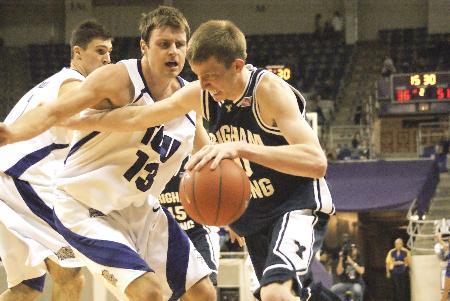 Less than a month ago, the men’s basketball team was tied for first in the Mountain West Conference, but after six straight losses, its record has dropped to 13-12, five games behind the University of Utah for the conference lead.

The Horned Frogs (4-7 MWC) led for less than two minutes early in the first half Saturday, but Brigham Young University quickly turned the tables and never looked back, going on to win 79-63.

“(BYU) scored a lot of different ways,” Christian said. “They take advantage of guys on your team who take a possession off. They seemed to find that guy every time.”

“We can’t allow that to happen,” Christian said. “On the other end of the floor you have to score to keep them out of transition.”

The Horned Frogs shot just 37.7 percent from the field.

The Cougars were led by junior forward Jonathan Tavernari. The Brazilian hit eight of his 13 field goals attempts, finishing the game with 19 points and six rebounds in 29 minutes before fouling out with 2:28 left. Cougar senior guard Lee Cummard led all scorers with 24 points and made all 10 of his free throw attempts.

“Tavernari is hard to guard,” Christian said. “Cummard is the guy who makes plays for everybody. He runs the floor so hard that he forces guys to get open.”

Tavernari said he is feeling confident in all of his shots right now.

“Every time I shoot I think the ball is going in,” Tavernari said. “I think my shot selection is improving and that is all because of my teammates.”

Christian said he is trying everything he can think of to get more out of his players, but right now he isn’t seeing the results.

“This was one of those days that we needed someone on our team to rise up and try to lead with effort and we really aren’t getting that right now,” Christian said.

This six-game losing streak is the longest string of losses for the team since an 11-game skid in the 2006-2007 season.

The next game for the Horned Frogs will be against the Air Force Academy Falcons at 7 p.m. Wednesday in Daniel-Meyer Coliseum.