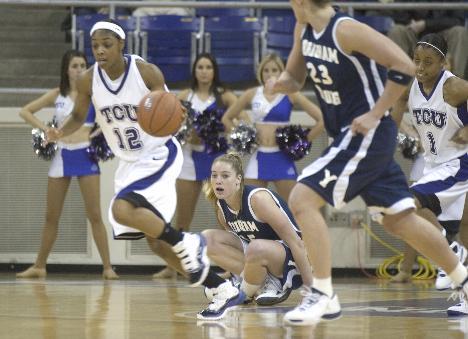 The Lady Horned Frog basketball team lost its claim to the top spot in the Mountain West on Tuesday with a 62-46 loss to the BYU Cougars.

Turnovers and poor field goal shooting caused the loss. The Lady Frogs shot 22.4 percent from the field in the game and 18.8 percent from beyond the arch. They also turned the ball over 20 times, resulting in 19 BYU points.

“We looked tired tonight,” head coach Jeff Mittie said. “We weren’t very tough tonight. Our starters were playing a lot of minutes. It’s hard to grind on them.”

Despite playing most of the game in a 2-3 zone, TCU struggled to defend passes near the basket, allowing 30 points in the paint. The Lady Horned Frogs also struggled in transition allowing 14 points off the fast break.

“It was a sloppy game tonight,” Mittie said. “Their defense forced us into some things we didn’t want to do. They looked to me like they really wanted to push tempo and they were able to get fast breaks because of that.”

TCU stayed in the game with its free throw shooting, finishing at 77.8 percent. The Lady Frogs were fouled 17 times resulting in 21 points from the penalty stripe.

TCU shot only 22.7 percent in the first half, reaching a low of 15.8 percent with three minutes remaining in the half.

“This is one of the more disappointing offensive performances we’ve had in my tenure here, certainly at home,” Mittie said. “Just credit to BYU, they guarded us well. You hope you get more rhythm as the game goes on, but it didn’t work out that way.”

Mittie plans to regroup and rest before the Lady Frogs’ next game against the Air Force Academy Jan. 17 at home.

“I think we have to get some rest and hopefully we can freshen their legs up a little bit and hopefully their mind too, because obviously after a game like this you worry about their confidence,” Mittie said.