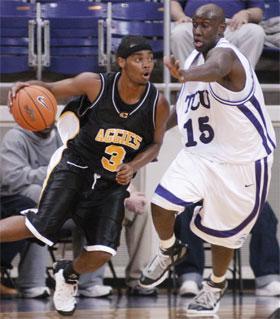 Senior Nile Murry led the Frogs with 25 points, just one shy of his career high.

Coach Neil Dougherty said what hurt the Frogs the most was too many second-shot opportunities in the second half for BYU.

The Frogs only trailed 38-42 at halftime.

Freshman Trent Plaisted was the leading scorer for the Cougars with 17 points.

Dougherty said the Frogs were also not able to guard without fouling. TCU sent BYU to the free-throw line 40 times.

But the Frogs do not plan giving up. “We just need to get over the hump and get a win,” Dougherty said.

“We have a coach that will not quit,” he said.