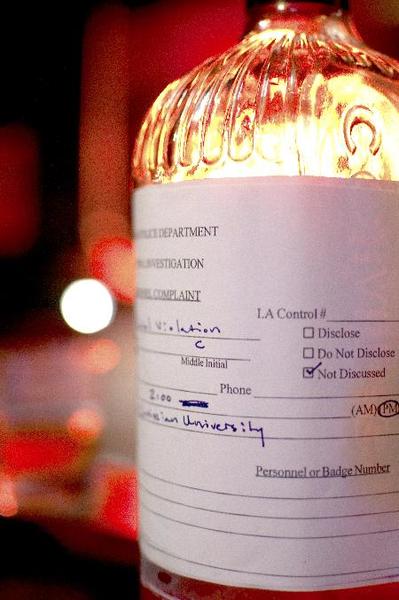 Don Mills, vice chancellor for student affairs, wrote in an e-mail that the increase in alcohol violations confirms anecdotal information that there appears to be more underage drinking on campus.

“While there can be many reasons why alcohol violations are increasing, no doubt one of them is the increased use by underage students,” Mills wrote. “This is a concern for TCU and we will study this issue carefully and continue to focus on responsible behavior by TCU students.”

However, the number of alcohol violations may not necessarily be an accurate representation of drinking trends on campus, said Yvonne Giovanis, assistant director of the Alcohol and Drug Education Center.

The university also welcomed about 200 more freshmen this year than it did in 2007, Giovanis said.

Further, students living in nontraditional housing leased by the university this year – townhouses on Cantey and Parmer streets and Sandage and McCart avenues, as well as 142 GrandMarc rooms – are now subject to campus alcohol policies. The university leased only 14 rooms from the GrandMarc last fall.

However, the number of alcohol violations does not show the whole picture, Giovanis said.

“What’s more important for us, it’s not just the numbers (of violations) but what’s reflective of the culture of the campus,” she said. “What are students reporting that they’re doing that might not be reflected in alcohol violations?”

Surveys compiled by the center every three years measure campus attitudes toward alcohol. The 2008 survey showed that one in every four students would prefer not to have alcohol available at parties. It also revealed that about 30 percent of students have driven a car while under the influence.

“I think they were involved in many of the incidents, and I just felt an opportunity to be able to have a conversation with them and share our concerns,” she said.

Nevertheless, all students, regardless of affiliation, need to understand the importance of making good decisions, she said.

There have been several vehicle accidents on or near campus this fall that involved drinking, including one that resulted in a student being injured, Robinson said, noting that she wasn’t sure whether the student was hospitalized. She said she didn’t have a specific number of accidents.

TCU Police Assistant Chief J.C. Williams said it is not uncommon to have at least one vehicle accident related to alcohol each semester.

During one particular weekend this fall, there were about 80 alcohol violations written at three different parties, Robinson said. Much of this activity took place in the GrandMarc and university-leased townhouses near campus, she said.

Tobi Sander, the GrandMarc’s director of community operations, said parties are frequent on home game weekends and that the university has stopped some keg parties in the complex.

On Oct. 1, a student reported that she was sexually assaulted after drugs were slipped into her drink without her knowledge. Robinson said she believes there have been other incidents where people claimed to have been drugged at parties, but she said she didn’t have exact numbers.

Evan Berlin, president of the Interfraternity Council, and Lindsay Ray, president of Panhellenic Council, said Campus Life and Greek leaders discussed the safety concerns as well as possible safety measures. They said they were not told at the meeting that Greeks were involved in many of the incidents.

“I think it still has the same severity, whether it’s Greek students or not,” Ray said.

As a safety precaution, buses are now leaving from well-lit, designated areas in Worth Hills, instead of pulling up anywhere, Ray said. Sorority presidents convened in a separate meeting to discuss their risk management policies, she said.

Berlin said the Interfraternity Council invited police and Robinson to another meeting to discuss ways to be safe and protect others by identifying unhealthy situations. They also discussed available resources in the event a student is accused of sexual assault.

“I don’t think men recognize that Campus Life is there as a resource for them as well, and I want to make sure that that is something they are made aware of,” Berlin said.

Kelsie Johnson, student body president, said Mills discussed alcohol violations with Intercom, a group of student leaders, to ask for feedback. Johnson said she thinks resident assistants are being stricter this year, an opinion which echoes that of her peers in Intercom, she said.

Unhealthy drinking behavior is not exclusive to TCU, Johnson said.

“It’s not directly related to TCU – it’s a nationwide college issue . universities across the country need to figure what if anything can be done to stop or decrease this problem,” Johnson said.