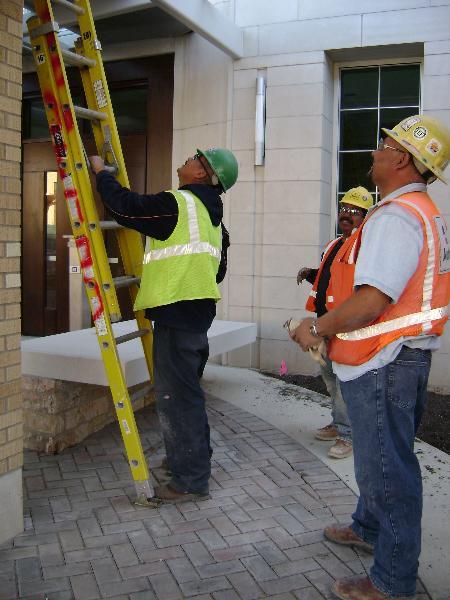 This semester, a newly built road stretches from the front of Clark Hall to University Drive.

The road from Clark was built because of fire restrictions, Provost Nowell Donovan said. The road is temporary and will be gone next fall once the hall is renovated, he said.

The Clark renovation is one in a sequence of renovations scheduled for the next few years, Donovan said.

Chancellor Victor Boschini said there will be more bathrooms and personal space added to Clark. He said a new lobby will also be added because most students use the back entrance.

Also, the lower two floors of the hall will house several student life facilities, including a career center and university ministries, and the third floor will be remodeled as academic space, Donovan said.

Boschini said: "We're keeping the entire facade of Jarvis because it has historic significance at TCU. In fact, we're taking it back to the way it looked when it was opened, so it will be much nicer."

Students who signed up to live in Clark or Jarvis this semester were given first priority to live in the new dorms, including Carter Hall, Samuelson Hall, King Hall and Wright Hall, said Jeremy Steidl, hall director of King and Wright halls.

"They knew they had the opportunity to move during the spring and they all seemed rather pleased," Steidl said.

The renovation of Clark and Jarvis are not the only changes occurring on campus. As the demolition of the Brown-Lupton Student Center progresses, Edens and Deco Deli will close after spring break, said Don Mills, vice chancellor for student affairs.

Mills said the change will not last long. The food served at Edens and Deco Deli will be moved to an unknown location until fall when similar food will be served at the new dining hall in the Brown-Lupton University Union, he said.

"The campus commons will be finished by the end of the summer," Mills said. "The front of the campus will be geared toward creating a nice space for students, and all of this continues to put TCU on the path to becoming more pedestrian."

Jarvis and Clark halls are scheduled to open next fall. Clark will return as a larger residential space and Jarvis will house student life facilities and academic spaces.

Scharbauer Hall, which will be built in place of the Brown-Lupton Student Center as academic space, is scheduled to open spring 2010. Construction on this space will begin following spring commencement in May.

Visit the Office of Communications online for more information