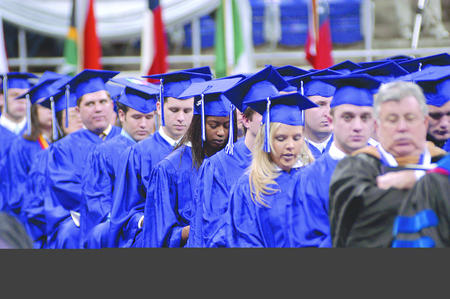 What’s changed the most about campus since you were a freshman?

“The four new dorms in front of the new student union used to be a huge field and parking lot that separated Milton Daniel Hall and Colby Hall. You would see guys playing football and girls laying out”.

“It weirds me out that Milton Daniel is a co-ed dorm now.”

“The Student Center being gone and the Main not being here.”

What’s your biggest fear about graduating?

“Not getting a job or having graduate school pan out and of course. … leaving Texas.”

“Being on my own and being out in the real world.”

Who was your favorite professor?

“Dr. Laura Meade, she teaches supply chain management. She is incredibly pro-students and really cares about our welfare as far as where we will be after graduation.”

“My favorite professor is Greg Mansur in the radio-TV-film department because he’s the man.”

Joey Parr, radio-TV-film and political science major from Fort Worth

“Dr. Dodson in political science because his lectures are detailed, rich and concise.”

“Dr. Lisa Vanderlinden because we share similar interests in the field of anthropology. I learn from her not based on her instruction, but based on her passion for the study.”

What will you miss the most about TCU?

“Since I am going into the graduate program at TCU next year, I’m going to miss having my friends around since so many of them are moving to different cities for jobs.”

Liz Lombardi, accounting and finance major from Fort Worth

“The tulips that they plant in March. Our campus looks so beautiful during the Spring.”

“Having everything at your fingertips. Your friends, food, the gym and plenty of fun are all in a tight community all within walking distance.”