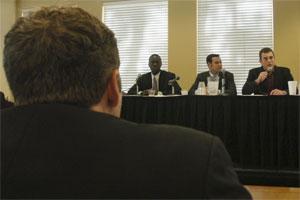 Although candidate Sheldon Pearson, a senior finance major, called high tuition costs a “losing cause,” the other candidates had ideas for solving the problem.

Glenton Richards, a senior radio-TV-film major, said TCU needs to adopt either a two or four-year locked-in rate. He said this will prevent another 8 percent to 10 percent tuition jump, which has happened each of the last three years.

Junior accounting and finance major Ryan Panno said any kind of locked-in rate would not come into effect until after a majority of the present student body had already graduated. Panno advocated a capped rate instead, which would prevent tuition from increasing more than a specific set percentage every year.

Trevor Heaney, a junior entrepreneurial management and finance major, said either of the plans would work, but a four-year locked-in rate would most likely be out of the question.

“It’s not really feasible to say that we’re going to be able to lock tuition rates for four years in just one year,” Heaney said.

One thing all four candidates did agree on, however, was that they were in favor of increasing the $20 student fee included in tuition costs that is paid to SGA and used to finance student events. Estimates of increases were around $2.

Watson said one issue that has not received as much attention yet, the new student union building, will most likely be the most prominent next year.

Watson also said the debate provided those in attendance with an accurate portrayal of each candidate’s values and opinions.

“I think you saw how they’re going to act as a leader,” Watson said. “They answered questions, and you always have to have an answer for the student body.”

Feleceia Benton, a senior advertising/public relations and theatre major, said that although she had attended several of these debates, this one was different.

“This year they really want to know what the student body wants,” Benton said. “They actually have some good ideas.