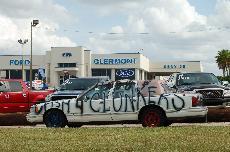 For the past summer months, I have constantly been bombarded by advertisements for the government’s Car Allowance Rebate System, more commonly known as Cash for Clunkers.

Although the Cash for Clunkers program promises to take older, less fuel-efficient cars off the road and provide an economic stimulus, it has ultimately fallen short in both cases.

The shortcomings of the program are not all inherent of the original plan; rather it is the consumers who deserve most of the blame. Foreign cars make up four out of the top five cars bought by Cash for Clunkers participants.

It obviously did not occur to these American buyers that our economy is in a state of turmoil. They did not realize that the purpose of the program was to stimulate our economy, not Japan’s. The original legislation included an incentive to buy American cars, but was dropped for fear of the arrangement with the World Trade Organization. The responsibility of using the program as an economic boost then fell to the American people.

Why did the program creators leave this decision up to the American people, a generally uneducated group of consumers?

I find it mildly entertaining when I hear complaints about the economy, yet when given a way to help our economy, many of the Clunkers participants still chose not to make an economy-friendly decision by purchasing an American-made car.

The most popular car sold during the CARS program, which ended Aug. 24, was the Toyota Corolla, a Japanese brand. If only those consumers purchasing the foreign cars would have thought about the impact they could have made by buying American. It seems that many Americans do not realize how vital the Big Three car companies are for our economy. Car manufacturing happens to be one of the few areas that the United States still makes an impact on the world economy. Many other jobs in other production areas have long since been overseas.

It is important to manufacture cars in America. The impact of the Big Three’s recent troubles has devastated our economy. This could have been partially prevented if people had bought American cars all along. This program gave an outlet for people to start buying American, and yet eight of the top ten models sold were foreign cars. Six of the eight foreign models were Japanese. The top ten models that were traded in to acquire the rebate, however, were all American. Toyota was the leader in cars bought with the program benefits. American cars only made up 41 percent of total sales, the other 59 percent of sales are benefiting foreign economies. How lucky for the Japanese, the biggest contender in the foreign automaker market.

Several of the Japanese automakers, such as Toyota and Honda, do provide some American jobs. These companies have plants and dealerships that employ Americans, however the majority of profits still go overseas.

The environmental aspect also falls short within the proclaimed program. Cars built before 1984 were not eligible for the program and ironically, cars dating from before 1984 guzzle quite a bit of gas. The program requires consumers to buy a new car with the rebate. Environmentally, it would make more sense to buy a used car instead of emitting all of the pollutant by-product in creating a new car. Discarding and destruction of the clunker also causes an economic strain.

In theory, this program could have done wonders for the United States. It’s a shame that buying American wasn’t mandatory.