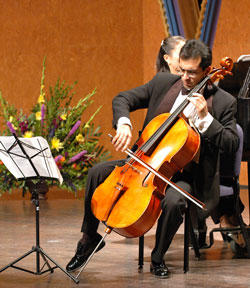 With his eyes closed, head cocked to the side and arm raised, holding a bow and waiting to glide it across the strings of a cello, Jesus Castro-Balbi begins playing “Vivo” by Marlos Nobre at the Latin American Music Festival. Castro-Balbi said he could not have mastered the cello without the help of a good education, support and belief in himself.

Castro-Balbi has been a cello professor at TCU for three years and a cellist since age 3. He said his success in music and teaching is due to a good educational background in music and academics. His education inspired him to teach others, he said.

Castro-Balbi put these good experiences and all of his beliefs about education into action when he came to TCU and started teaching cello classes in fall 2005. That’s also when he created the TCU Cello Ensemble. He said he started the ensemble to unify the cello students so they could form great relationships with their peers. He calls it a “social fabric.”

“Our ensemble has developed a repertoire that’s unique,” Castro-Balbi said. “We have been given first performances to some works.

“The cello ensemble plays all kinds of music, from Bach to Joplin, and even new works by distinguished TCU faculty (members), Dr. Blaise Ferrandino and Dr. Robert Garwell.”

Before the creation of the ensemble, cello students just played in the orchestra or chamber, which is a smaller ensemble, he said.

Hyung Kim said the cello ensemble is a requirement of all cello performance majors.

“The music we rehearse is really great,” said Kim, a freshman cello performance major,. “I now enjoy playing in the cello ensemble because of the music. If there’s one musical event that TCU students should come and listen to, it’s cello ensemble.”

Castro-Balbi said he is especially glad to have had a good education and great teachers because he can complete his mission of going out and teaching students all his lessons and techniques.

“My first cello and first teacher was a good experience,” Castro-Balbi said. “I was lucky to have a good teacher from the beginning because it is a gift few are given.”

Castro-Balbi was born and raised in Peru until age 5, when his family moved to France because of a job offer. He received his bachelor’s degree in music at Conservatoire National Superieur in Lyon, France, and then received his artistic diploma at Indiana University in Bloomington, Ind., his master’s degree at Yale and his doctorate of musical arts at the Juilliard School of Music.

He said he went to these different schools so he could learn from the teachers. He said some of the professors he worked with were worldwide recognized experts in their fields and some of his most defining moments in his musical career were playing side by side with these great teachers, he said.

Kim said Castro-Balbi is a great teacher and conductor.

“He is very demanding of each performer to do his or her best,” Hyung said. “The standard he sets is very high.”

Castro-Balbi said he believes education is extremely important for musicians, especially because it helps them grow musically and mentally. He said if cellists want to be the best, they need to have a deep understanding and know the theory and history behind the music. Education gives musicians an opportunity to understand the world they live in, which can open doors to them becoming true artists, Castro-Balbi said.

“It’s important for a cellist to take a religion class, it can enrich them musically,” Castro-Balbi said.

He said taking different types of classes such as science, politics and drama increase a musicians’ level of playing and their music literacy. He said education is like a “shortcut” to the life experiences you may or may not be able to experience first hand.

Castro-Balbi said through education a person can mature, which can help a musician play and develop better. He said this produces self-confidence – a quality he said is the most challenging for musicians to obtain, including himself.

Resisting the temptation to imitate others is also very challenging for a musician he said.

“Finding out who you are and your musical voice, a process everyone must go through – the sooner you develop this, the sooner you can develop as an artist,” Castro-Balbi said.

Castro-Balbi said he comes from a family of professional musicians who taught, performed and recorded music. He said music “pre-existed” in him.

The CD, “Rapsodia Latina,” consists of works in piano and cello. Castro-Balbi said this CD is different because this is the first time he released a CD with his wife, Gloria Lin. Lin is an award-winning pianist who has performed worldwide and is also a TCU adjunct music professor.

“Playing is very inspiring, and he inspires me,” Lin said.

Castro-Balbi said he looks forward to next year’s classes and hopes there will be an increase in cello students. He also said the cello ensemble has plans to record their music next spring.