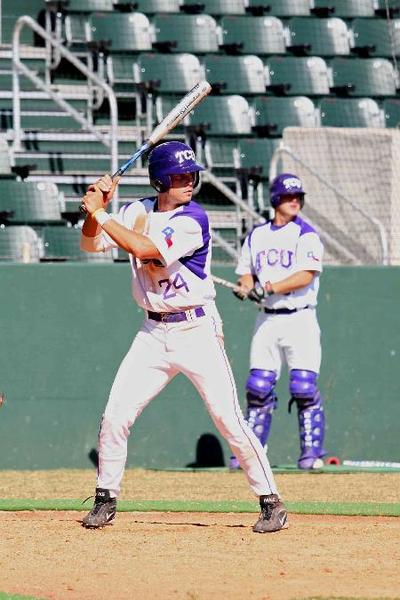 An experienced leader in center field headlines this year’s outfield for Horned Frog baseball, which will also be relying on a handful of infielders adjusting to the deeper position.

Head coach Jim Schlossnagle said senior center fielder Clint Arnold is one of the team’s vocal leaders – a player most everyone else on the team looks to for guidance.

This will be Arnold’s second season playing for TCU since transferring from the University of Arkansas.

Last season he was named First-team All-Mountain West Conference after hitting .326 for the year, the fifth highest batting average on the team.

Arnold will shore up the outfield, which should see a rotation of players in the other two positions.

“Most good teams are strong in the middle of the field. We’ve got that,” Schlossnagle said.

Schlossnagle said he predicts to start the season with junior Matt McGuirk in right field and freshman Aaron Schultz in left.

McGuirk, a hometown product who went to Arlington Heights High School, returned from a medical redshirt last year and started 25 games as designated hitter and one in left field.

The lefty has had two shoulder surgeries in the past two years, and as a result has not been able to play at maximum potential, Schlossnagle said.

McGuirk, who has only been able to play as a support player since his surgeries, is going to need to become more of a run producer this season, Schlossnagle said.

The predicted left fielder, Aaron Schultz, is a freshman playing his first year of college baseball.

Arnold said Schultz is probably more of an infielder but expects great numbers from him.

During Schultz’s junior year in high school he led his team in the spring in home runs, RBIs and doubles.

The right field position will most likely feature a rotation or platoon of players, Schlossnagle said.

Juniors Matt Vern and Chris Ellington, as well as senior Steve Ellington could all see time in the outfield this season.

Vern started 55 games last season and is primarily used as a first baseman.

Schlossnagle said he expects Vern to start the season at first, but a time in the outfield is a possibility.

Arnold said he thinks Vern will see some time in the outfield this year in right field.

“I don’t want to jinx him or anything, but I predict a great year,” Arnold said. “I really think he’s going to drive the ball this year, hit more home runs and he’s a really good outfielder too.”

Chris Ellington is another possibility to get some innings in right.

In his first year at TCU since transferring from Grayson County College, Chris Ellington said it’s a good thing the team has so many options for outfield.

“If somebody’s not getting the job done we have a lot of different options to go to get people to produce,” he said.

Steve Ellington, who has no relation to Chris Ellington, started 16 games in left field last season.

Although Steve Ellington isn’t necessarily a potent hitter, batting only .200 last season in 65 at-bats, he makes up for it with his defensive skills. He finished last season without an error in 20 chances.

Arnold said one of the team’s bigger strengths is that it has so many players able to make the switch from infield to outfield.

“We’ve got a lot of flexibility, guys that can play a lot of positions,” Arnold said. “We can adapt to things, God forbid injuries and things like that.”

This year’s outfield has a lot of unknowns and one team leader.

But that team leader, Arnold, said he knows good things are going to happen with this group.