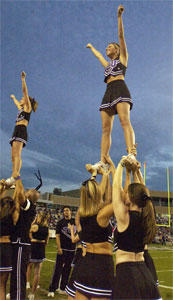 The stunt that sparked a confrontation between an associate athletics director and the head cheerleading coach two weeks ago has been suspended from the squad’s football game routine, even though it has been a part of the team’s repertoire for several years, a cheerleader said Tuesday.Cheerleading captain Jovan Farris said the team will not be allowed to perform basket tosses at this weekend’s football game by order of associate athletics director Scott Kull. Farris said she thinks the restriction is based on an isolated incident.

“I think it stems from one toss that didn’t fall in complete safety,” Farris said.

Kull said he does not see the suspension as a constraint, but as a commitment to safety.

“I wouldn’t say it’s a restriction,” Kull said. “We’re just going to go with the same game plan as last week. We want to be careful about what we do.”

Even though Farris said some of the veteran cheerleaders have been performing basket tosses for several years, Kull said the cheerleaders need a permanent sponsor in order to perform the stunt.

“It has to do with the history and the familiarity the cheerleaders have with a permanent coach,” Kull said.

Farris said the squad will be allowed to travel to the football game against the U.S. Air Force Academy but is still waiting for a temporary sponsor to accompany it. The temporary sponsor who attended the Homecoming game is unable to attend the trip, Farris said.

Cheerleader Troy Cole said the lack of a permanent sponsor not only keeps the squad from performing its full routine, but negatively affects what it is allowed to do.

“Our sponsor scolded us at halftime at the last football game,” Cole said. “I know we weren’t as sharp as we could’ve been.”

Cole said the team is happy to be able to still travel but cannot improve without a coach.