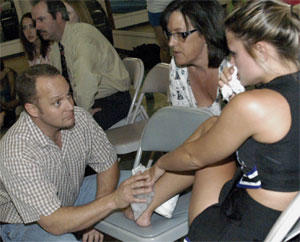 Cheerleading head coach Jeffrey Tucker was fired Monday for undisclosed reasons pending an appeal process, associate athletics director Jack Hesselbrock said Tuesday.Scott Kull, associate athletics director for external operations, declined to comment on the reasons behind the firing, but said the focus now is finding an interim coach to manage the team during the appeal.

“I just told (the cheerleaders) that we had a change in leadership,” Kull said. “We’re just trying to find somebody to act as a sponsor right now.”

Cheerleading captain Magean Thompson said the team will be affected by the coach’s absence. Without a coach, cheerleaders can still cheer, but are not allowed to perform stunts at any football games.

Tucker has opted to appeal the firing, a procedure Hesselbrock said should last about a week.

The appeal process consists of three stages: a mediation, a peer review and, if necessary, a meeting with Chancellor Victor Boschini, Hesselbrock said.

During the mediation period, Tucker will meet with administration under the guidance of trained faculty mediators, Hesselbrock said. If the two sides cannot come to a satisfactory decision, the appeal will progress to the peer review stage, where Tucker will appear before a board of faculty and staff, Hesselbrock said. If, again, no conclusion is reached, the appeal will move to Boschini.

Thompson said team safety has become a recurring issue this year as a result of several on-field incidents.

After the University of Oklahoma football game Sept. 3, an OU fan wrote a letter to Kull describing one of the TCU cheerleaders’ stunts as unsafe, Thompson said.

At last weekend’s football game at the University of Wyoming, a stunt resulted in a student-athlete losing her balance, but still being caught. Thompson said she was told by Tucker that Kull came down from the stands and “had a confrontation” with him following the fall.

Tucker confirms that a discussion with Kull took place, but declined to elaborate.

“Was there an incident in Wyoming? Yes,” Tucker said. “Did I initiate it? No.”

Thompson said she told Kull in a Monday evening meeting with the cheerleading captains that the team accepts the dangers inherent in cheerleading and should bear the blame for incidents more than the coach.

“We, as cheerleaders, assume the risk of cheerleading,” Thompson said. “If the issue of safety is being put all on Tucker’s shoulders, it shouldn’t be.”

Thompson said Kull told the cheerleading captains that, while safety was not an issue, insubordination was. Thompson said she was not sure how administration defines that term or whether it is a fireable offense.

Attempts to reach administration about the allegations of insubordination were unsuccessful.

“Apparently, there was more issues than we knew about,” Thompson said.

Tucker said that despite the events taking place, he is focused on the student-athletes and his relationship with them.

“I care about this program; I care about these kids, and I still love TCU,” Tucker said. “It’s unfortunate, and I hate that it occurred, but we’ll have to see how the process goes.