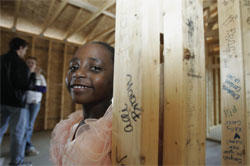 The class of 2008 aims to raise $53,000 by Dec. 1 for FrogHouse, the junior class Habitat for Humanity project, which provides a new volunteer-built home for a family in need.The $53,000 is the standard fee required by Habitat for Humanity for the build, said Melissa Boyd, associate director of the TCU Leadership Center. The money will pay for everything from land to needed materials, she said.

Habitat for Humanity requires a minimum 50 percent down payment at least 60 days before construction begins; the other 50 percent is due 30 days after the down payment, Boyd said. The entire down payment for FrogHouse will be paid on Dec. 1, since students aren’t on campus to raise funds during winter break, Boyd said.

FrogHouse Executive Director Alison Raff, a junior movement science major, said she has no doubt the $53,000 will be raised by Dec. 1.

“We’ll make it,” she said. “It’s going to be hard to do it, but I think that people are going to realize that this is a good cause, and they are going to want to do whatever they can.”

The project is led by a group of juniors who meet every Sunday night as part of a class in the School of Education. Students receive three hours of class credit for their work on the project.

FrogHouse team members sent letters to corporations and businesses in the Dallas/Fort Worth area and to parents of the junior class asking for donations, Raff said. They also asked for donations after a presentation at the Parents Council meeting during Family Week.

The students have already raised more than $11,200, majority of which has come from parents of juniors, said Marcy Paul, director of the Women’s Resource Center and FrogHouse adviser.

There are also fundraising events scheduled during Junior Week, which takes place in mid-October, Raff said. The biggest event they have planned is a percentage night on Oct. 16 at Potbelly Sandwich Works, where the restaurant will donate 50 percent of its proceeds to the FrogHouse fund.

“That’s going to be a big thing for us to do – getting the word out about that,” Raff said.

FrogHouse is the class gift from the class of 2008.

“Junior year is almost the end of our time at TCU,” said FrogHouse team member Rachel Fosdahl. “Now is the time for us to branch out into the community.”

Fosdahl, a junior English major, said she wanted to be a part of FrogHouse because she enjoys helping people.

“It’s intense, but it’s a lot of fun,” she said. “It’s really rewarding to be able to see it from start to finish.”

Fosdahl and Raff both emphasized the importance of giving back to the community.

“As children we all had houses and security,” Fosdahl said. “But these people don’t have that. We’re just giving them the same that we had.”

“We can’t fail or the family doesn’t get a home,” Boyd said.

Construction will begin the third week in February. Building, which could take eight to nine weeks to complete depending on the weather, will take place on Fridays and Saturdays.

Last year’s FrogHouse opened three weeks later than planned due to several rain-based postponements, but the family of eight is now living in its four-bedroom house.

The location for this year’s FrogHouse is not yet finalized, but, Fosdahl said, ideally it will be close to campus.