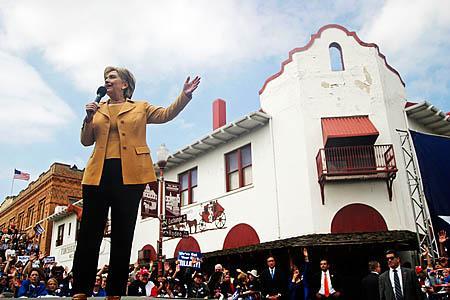 Read more in the Skiff Politics Blog.Moments after the crowd chanted “mighty, mighty Hillary” in pep-rally fashion like “Remember the Titans,” Sen. Hillary Clinton, D-N.Y., addressed 5,000 people at a rally in the Fort Worth Stockyards.

“What a beautiful day for us to get excited, energized and enthusiastic so we can make sure to turn Texas into Clinton country,” she said.

Don Mills, vice chancellor for student affairs who attended the rally in the Stockyards, said he tried to go to all the presidential rallies that have come to town, and has experienced the obvious differences between the candidates.

He said the Sen. Barack Obama crowd is younger and more diverse with a sense of “happening,” while the Clinton campaign hosts more traditional rallies.

“For me, the last time there was this sense of experience was when Bobby Kennedy was running,” he said. “I think the same thing is true now, but you have two really fabulous people running and I don’t think students will forget this experience.”

Sights and sounds from the rally

Click the play button (above) to watch the show.

Although it seems Obama is seen as a phenomenon on campus, there are students who are avid Clinton fans as well, he said.

Valerie Alvarez, a senior art education major, said she feels like she is going against the grain supporting Clinton.

“As college students, we should make a choice for who we support and not just jump on the bandwagon,” she said.

Clinton’s first rally, scheduled Feb. 22 in downtown Fort Worth, was cut short after a veteran Dallas police officer was killed in a motorcycle crash while working in Clinton’s motorcade.

During the rescheduled rally, Clinton focused on the changes she plans to implement in health insurance by giving people access to affordable health care, along with improving education by increasing funding to programs such as Head Start, and ending the war in Iraq.

“This is a war-time election,” Clinton said. “We have a war to end in Iraq and a war to win in Afghanistan.”

Clinton also stressed the importance of having someone experienced in the White House.

“I want you to think about who you would hire to do the toughest job in the world,” she said.

Alvarez said not everyone knows what to do in the White House, and she believes Clinton will be the best choice because of her experience.

Clinton joked about how long the presidential job interview is, but said she has 35 years of experience that should help her.

“If you give me the vote,” she said, “I will give you my best effort to translate all of these speeches into solutions.”