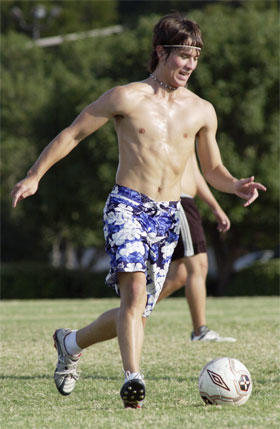 Male soccer players at TCU have the opportunity this year to compete against other colleges and universities, despite the lack of a men’s varsity soccer team.After five games, the men’s club soccer team, which began playing this semester, is 4-1, said team president Micah Munekata.

The team plays in the Texas Collegiate Soccer League, which is divided into regions, Munekata, a junoir political science major, said. TCU plays in the Lone Star Men North region, along with two Texas-Arlington teams, Abilene Christian and Tarleton State. Every team plays each other twice.

Ordonez, a radio-TV-film major, who has scored the most goals in the region, could not name a certain aspect of the game that has contributed to the wins. He did mention the importance teamwork has played.

“Everybody gets along well,” Ordonez said. “We meshed really quickly.”

After practicing together for one week, the team won its first game 3-0, Munekata said.

“We haven’t had that much experience with each other, and we’ve already got a winning season,” he said.

There is no maximum numbers of players the team can have, but only 18 can suit up for the games, Munekata said.

Approximately 40 students were interested in the beginning, but he said the team has 18 committed players going to practices and games.

The team practices two days a week and competes on the weekend.

Munekata said he planned to play soccer for TCU as a freshman in 2003 and was disappointed when the men’s program ended.

Munekata said he and his friends had been talking about forming a club soccer team since the beginning of last year and got serious about it in the spring.

“We came to TCU wanting to play soccer,” Munekata said.

Cristie Carpenter, assistant director of intramural and sport clubs, said Munekata and other soccer players met with her to discuss forming a club team in the spring.

Carpenter said there had been talk of forming a team before, but no one had actually gone through with it.

The players do most of the work running the team, Carpenter said.

“I deal with them on money mostly,” she said.

To cover the cost of league entry fees and uniforms, Munekata said TCU provided the team $1,000 and each player paid $75 in dues for the semester.

The team has three more regular season games, which will be played at home on the intramural fields. TCU plays Abilene Christian, the only team the club lost to, at 1 p.m. Saturday and UTA at 1 p.m. Sunday.

“We have some loyal fans, but we could use more,” Munekata said.

After the regular season, the regional winner will play in the Region IV Tournament at the end of October.