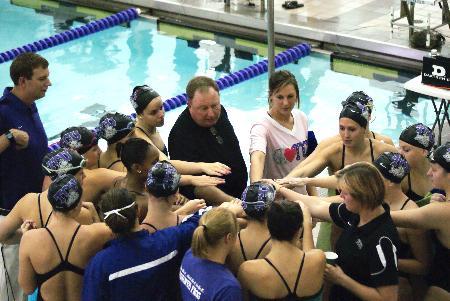 One of swimming coach Richard Sybesma’s greatest professional achievements is the kind of understated award you would expect for winning a single tournament. It is a five-inch tall rectangular crystal with his name and Conference USA Student-Athlete Advisory Committee Committee’s Coach Choice Award written in to it.

He was selected by a group of Conference USA student-athletes as the best coach of any sport in the conference. It sits next to his Conference USA 2004 Coach of the Year trophy. He prefers the one from the students.

The presentation banquet was nonexistent. There were no banners, no balloons no great cheering crowd-in fact, he received it at his home via FedEx.

He can tell you how impressive the growth of this campus, athletic programs and student body has been for the past 30 years.

He has been coaching here for every one of them.

It would take a fairly driven man to create a swimming program at TCU-it would invite comparisons with cross-town rival and national powerhouse SMU, and at that time in the University’s history, competing with SMU was usually bad news.

Former athletic director Frank Windegger made an offer to a 25-year-old Sybesma in 1979 to become the swimming coach it was still a club sport and Sybesma would be taking a $5,000 pay cut to move to the college ranks.

The early days were rough. The facilities were unimpressive, the coach inexperienced and the accommodations were. lacking.

“We used to take three or four vans, and we would have to have the students drive,” Sybesma said. “We usually ate fast food and stayed at less-than desirable hotels. When we were eating at McDonald’s one time, one of the kids said, ‘Why do we have to eat at McDonald’s?’ and I said, ‘If it matters where we’re eating, you’re not thinking about the right thing.'”

A swimmer from early in his career, TCU Letterman’s Hall of Fame inductee Becky Brill Hall [’82] described a trip to Marquette, Wis. for nationals:

“[We] didn’t even have money for coats! So he pilfered really old football jackets that no one was using-so here are these girl swimmers in these huge football jackets!”

Admittedly, the obstacles were many, but it was, a college job after all, wasn’t it? Sybesma had his foot in the door, competing at the level he desired and controlling his program.

And it was his.

“Over the years, there were times when we didn’t have any assistants or if we did, we had a graduate assistant,” Sybesma said. “So, I’ve had to do it all at one time, including run the pool. Between the paperwork the NCAA makes you do, and now international recruiting, I’ve learned you can’t do it all yourself.”

The women’s team did not compete in conference until three years after Sybesma’s arrival, and the men’s team struggled to keep up with their Southwest Conference competition after a decent fifth place finish in their second year.

Simply put, the team was outgunned in a conference featuring programs like SMU and Texas who were attracting national recruits with better pools, more exposure and name recognition.

“Texas and A&M and SMU all have very good swimming programs and our big goal every year, because it was the best we could do was third in the conference, ahead of A&M,” Sybesma said. “Texas was national champions, SMU was always top 10 or 15 and A&M and us always battled it out.”

However, to say that there weren’t good times even then would be a gross overstatement. Dale Pulsifer [’81] began at TCU in the fall of 1977 and was one of the early leaders of the program. He saw the transition to Sybesma and moving out of club sport status, and would stay with the team as an assistant coach his fifth year at TCU.

These days Pulisfer keeps in touch with Sybesma and considers him a close friend as well as the reason for the swimming program’s rise.

“I would venture to say that if you took a look at all the swimming programs around the nation, with the challenges he gets presented with, the accomplishments that his swimmers have and the way he runs that program?” Pulsifer said. “He’s got to be one of the top five coaches in the nation.”

While the “Top Five” ranking is debatable, Sybesma definitely coached the teams up to a level that the athletes alone may not have achieved. Thankfully, A&M was able to provide some competitive fuel to make his job easier.

“My first time we went to [A&M] for a meet, they had on the chalkboard, ‘Sign-Up for what you want to swim against TCU. I never forgot that and used it as motivation every year for my team.”

After the 1984-85 season, the men’s team would never finish below fifth in the Southwest Conference again. However, there was one thing Sybesma thought the team could achieve.

The men’s team had a poor in the 88-89 season. They finished just 2-7-1 on the year and struggled to a fifth place finish in conference.

Sybesma says playing a tougher out-of-conference schedule led to the poor finish, but also prepared the men’s team for the next year.

The Frogs broke through. While a bronze medal may not seem all that impressive, the team finished only behind the two talented rivals. Finishing third meant that they could compete with just about anyone in the country and would help with recruiting in conference.

Unfortunately, the Southwest Conference was on its last legs. In the final six years, the women’s team matched their highest finish in conference (4th) while the men had one more third place finish in 1994-95.

Then in 1996, for Sybesma and the Horned Frogs, it was on to the Western Athletic Conference.

LIFE IN THE WAC

The story of TCU’s snub by the Big 12 in favor of Baylor has become the stuff of Texas legend. At the time, it couldn’t have been a harsher hit for the athletic programs to take. It seemed like the Frogs were destined to slide in to obscurity.

According to Sybesma though, it became a blessing for the university.

“When we didn’t get in the Big 12, I think that is what woke TCU up,” Sybesma said. “Everybody was shocked they took Baylor instead of us and three or four years after that is when some big changes happened. We had to decide, ‘Do we want to be big time Division I?’ A lot of people said, ‘We’ve go to do something about this.'”

“Individuals did well in the WAC years, but the teams were not as good,” Sybesma admitted.

The teams in the WAC years remained competitive, with the women placing as high as fifth and the men second in 1999-00, but when the Mountain West Conference formed in 1999, it took much of the talent in the WAC with it. TCU was for once, the big fish in a small pond.

It would be harder for Sybesma to find quote board material.

The Frogs would again have to find a new conference, but this time the outlook was positive. Conference USA was the next destination.

And a winnable one.

SUCCESS IN THE C-USA

After 23 seasons of coaching at TCU, Richard Sybesma recorded his first conference championship, as his men’s team went 9-2 on their way to the C-USA title.

“It was awesome,” Sybesma said. “What I’m in this for is to see that kind of excitement out of those kids.”

It was great. Exuberant. Relieving. And not enough.

As Sybesma said about his hopes for this year’s team and future teams:

“The goal is winning a conference championship and having that goal out there is what we’re here for.”

So after the men won, it was back to work for both teams. They came close the next year-the men won again, this time with an 8-5 record. And the women posted a 12-2 mark. Good enough for. third?

“We just didn’t get it done in the conference tournament,” Sybesma said. “We had one relay disqualified and it cost us.”

The team came out ready to race in 2003. They had a new venue in the Campus Recreational Center, which was pretty but not perfect, much like the previous team.

“This pool looks a lot better than it did five years ago-it would be like the difference between our old student center and the BLUU,” Sybesma said. “We have the atmosphere of a big time meet. We do it right and the scoreboard is awesome, but we just don’t have a championship caliber pool.”

However, that doesn’t mean the team in the pool can’t win championships.

In the 2003-04 season, both teams were like sharks smelling blood. They went a combined 21-3 and finally got their sweep. It was the first ever in C-USA history, and expected to be the first of many for the Frogs.

“It was just a joy for the program and the University for all the years we worked,” Sybesma said.

However, he still had one more thing to learn in Conference USA.

The next year the teams again looked tough, but not unbeatable. They had put up a 18-5 mark combined on the year, and had a champion’s swagger going in to the conference championships.

The men once again took care of business, winning their fourth straight C-USA title, but the women’s team needed a win in the last race.

They fell short. “Within inches” short. Sybesma describes it as one of the toughest moments he’s ever had as a coach. This team and this program were used to being the David, not taking a slingshot-wounded Goliath.

“The important thing we learned out of it is that every swim and every individual counted in that win [in 2003-2004] or that loss [in 2004-05],” Sybesma said. All coaches have to deal with that one time or another in their careers and it hurts.”

The team learned to handle disappointment that day, something a championship program will have to do.

“I come to work some days and say, ‘This is great, this is fun!'” Sybesma said. “Then there are other days when you think, ‘Wow. This is really tough and I got to get through this and get my team through it.'”

It would be the team’s final C-USA championship. They were moving. Again.

Sybesma has seen the team in to its fourth conference since he’s been here. This time the Mountain West. So far things have gone fairly well, but the coach believes the best is yet to come here.

The program that he built is currently young and strong, and depending how the next couple of recruiting classes pan out, could be formidable. Mountain West Championship-worthy, even.

But as Sybesma sits in his office, he takes a call from a recruit. It provides a reminder how champions are built. One day at a time. Even if you’ve been here for 10,950 of those days already.

“[I want my legacy] to be that I was a small part of what helped TCU get to where it is today,” Sybesma said. “And that means TCU in general; it encompasses swimming, it encompasses how swimming is thought of here, it encompasses relationships with people.”