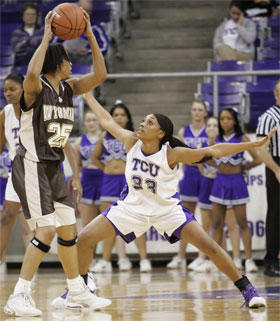 It may not be March yet, but the Lady Frogs are already being wary of the Madness that college basketball has defined it with.Although TCU faces an 8-15 team in Colorado State tonight, junior forward Ashley Davis said the Frogs are guarding against coming out flat.

“We’ve been talking about how their record doesn’t tell you how good they are,” Davis said. “We have a feeling they’ll upset someone … we have to make sure it’s not us.”

The Lady Frogs (14-9, 8-4) will be looking for the season sweep of the Rams following their Jan. 21 victory in Fort Collins, Colo. TCU had four scorers in double digits in the 73-63 victory and fully exploited CSU’s power players with a rebound margin of 48-35, more than half of which came on the offensive end.

Head coach Jeff Mittie said the team played well in the earlier win but is still striving for improvements.

“We had a very good game against them up in Fort Collins,” Mittie said, “so we know what they’re capable of. When they play well they have some talent … Our mindset going into this is just that we need to play better basketball. We need to continue to improve. “

One of those talents is 6-foot-2-inch forward Melissa Dennett, who recorded a double-double in January’s match up. Dennett is currently leading the team in both points (14.9) and rebounds (8.5) average but has also been turnover prone and averages just less than 3.5 a game. While not an especially high number, the Lady Frogs used the Rams’ ball insecurity against them earlier in the year, forcing 21 turnovers that led to 25 points.

The Rams average more than 4 turnovers a game more than their opponents. Sophomore guards Adrianne Ross and Moneka Knight each had 3 steals in the January contest.

Depending on that point production is unreliable at best, however, and Mittie said the Frogs are working on improving their half-court offense.

“I still think, offensively, we aren’t getting the type of ball movement we were when we were really good,” Mittie said. “We tried to work on that in practice in the past couple of days.”

The Frogs might have to remedy the situation without junior guard Natasha Lacy at full health. Lacy missed Monday’s practice with pinkeye symptoms but was cleared to play Tuesday. Mittie said despite her recent illness, Lacy will likely play tonight.

Mittie said the room for errors becomes increasingly smaller as the season winds down.

“We’ve done some things in the last couple of practices that have been better,” Mittie said. “There are some areas we’re still trying to shore up because coming into the stretch, we have to eliminate some of our problem areas.