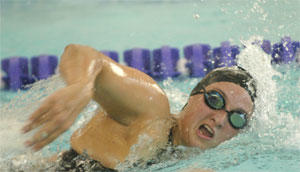 The women’s swimming and diving team beat both the University of North Texas and the University of the Incarnate Word at home Wednesday and is looking to improve in its meet today, head coach and players said.Sophomore Maribeth Pottenger said the team was not focused on training for Wednesday’s meet, but has been looking ahead to Friday’s dual conference meet at the University of New Mexico, the last before the Mountain West Conference Championships.

“I think we are going to do really well in conference and I think we have a chance of winning,” Pottenger said. Head Coach Richard Sybesma said that the team went into Wednesday’s meet tired because of the intense training schedule it has been keeping.

“This is a little bit of a weaker team than what we’ve been swimming,” he said. “Even though they were tired, they raced really hard.”

Sophomore Emily Duerringer said that the meet was just another chance to train and compete in preparation for the rest of the season.

“We were really tired and exhausted from practice going in,” Duerringer said, but that the team “did what they had to do.”

“We lost to them and we’re a better team than them so we shouldn’t have,” Duerringer said.

The Frogs finished with 60 points over UNT’s score of 40 points and Incarnate Word’s score of 20 points improving their record to 19-2.

Sybesma said he was worried the team would let down its momentum after “an emotional win on Saturday against Missouri State (University),” but that the team “responded well against North Texas.”

The women’s team will compete in its last dual meet of the season at 7 p.m. today in Albuquerque, N.M. The Mountain West Championships will take place Feb. 22-25 in Oklahoma City.