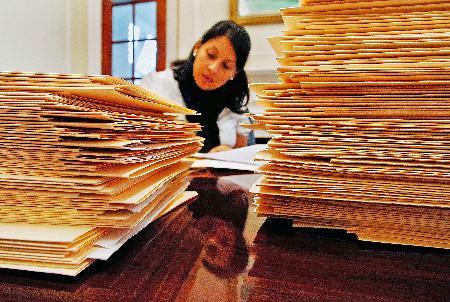 CHARLOTTE, N.C. – George Alyateem is a senior at East Mecklenburg High, a fine student with a 4.5 grade point average in the school’s rigorous International Baccalaureate program and a receiver on the football team.

Yet he can’t quickly rattle off all the colleges where he’s applied for admission.

There are too many – nine.

“The competition is rising,” said Alyateem, who wants to be an orthopedic surgeon. “Applying to more colleges gives me a better chance to go to the school I want.”

It’s seniors like Alyateem who have admissions offices at colleges working overtime sorting through stacks of applications.

Applicants to Queens University of Charlotte, N.C., are up 37 percent over last year. The numbers have also jumped at Davidson College (up 10 percent), Johnson C. Smith University (10 percent) and UNC Charlotte (5 percent).

Winthrop University in Rock Hill, N.C., has four to five applicants for each available space in the next freshman class of 1,000 to 1,075 students. A number of trends are fueling the rise.

Nationwide, the current high school senior class is the largest in 20 years. They’re applying to college in record numbers and the process has never been more user-friendly – with most colleges accepting applications online. Some schools waive application fees if students file that way. More seniors are casting wider nets, applying to multiple colleges. The “Common Application” works at 315 schools nationally – including TCU. A student can apply to several schools with the punch of a computer button.

“Where once students were sending three applications, they’re up to five to eight,” said Tina McEntire, UNCC director of undergraduate admissions. “I’ve talked to my colleagues and everybody’s up.”

There are pitfalls for applicants.

With a bigger applicant pool, schools can be more selective. TCU’s acceptance rate rose from 46 percent last year to 47 percent this year.

At schools like Davidson, with no plans to increase enrollment, wait lists could grow.

“It puts us in the business of having to say ‘no’ more often,” said Chris Gruber, Davidson’s vice president and dean of financial aid.

And application fees aren’t cheap – $50 a pop at Davidson and UNCC. George Alyateem spent nearly $500 to file his nine applications.

The applications spike won’t necessarily translate into larger freshman classes. Since many students are filing multiple applications, they’re applying to schools they have no intention of attending. “These kids want choices and they can choose only one school,” said UNCC’s McEntire.

“The 150 very selective colleges are sending out more acceptances because they’re having a harder time figuring out who’s going to attend,” said David Hawkins, director of public policy and research for the National Association for College Admission Counseling. “So in a way, these students who send out 10 to 15 applications are shooting themselves in the foot. They’re causing some of the uncertainty in the admission process.”

“We tell kids they should have a dream school and the other ones should be sure schools,” she said.