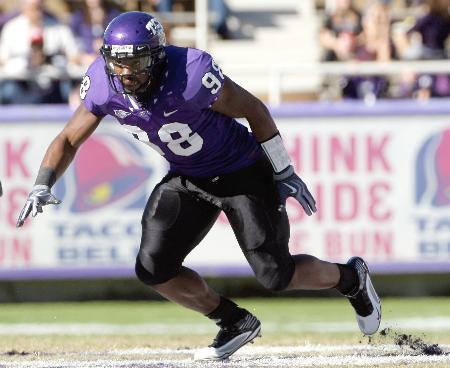 The Indianapolis Colts drafted former Horned Frogs outside linebacker Jerry Hughes with the 31st pick of the 2010 NFL Draft. Hughes will join the defending AFC champions as the 12th first-round draft pick out of TCU.

“I’m really happy for him for the simple reason that he could have gone out in the draft last year but he came back to get his degree and help us win a championship,” said head football coach Gary Patterson. “I was really hoping that he’d get an opportunity because he did so much for everybody else.”

The Colts like players with a quick first step who have the ability to be speed rushers at the defensive end position, Patterson said.

“(The Colts) have two defensive ends that are getting older, and Jerry is a great character guy who is going to work hard at what he does,” he said.

Patterson said he wouldn’t have been surprised if Daryl Washington, the Frogs’ other 2009 starting OLB, would have been drafted in the first round. Which ever team drafts Washington will have a player whose best days are ahead of him, he said.

“You get a good guy (in Washington) that has tremendous upside, he’s the fastest line backer in the draft,” Patterson said. “He’s a blitzer and a tackler who can cover some wide receiver and definitely cover tight ends and running backs.”

“A lot more people are starting to pay attention to (TCU),” Patterson said. “We had four or five guys drafted last year, and we have a chance to have a bunch drafted this year. It just shows you where TCU started and where it has gotten to. We are going to keep climbing the mountain.”

Defensive end Jerry Hughes dominated the playing field during his time at TCU and heads to the Indianapolis Colts as the 31st pick in the first round of the 2010 NFL draft with a plethora of accolades under his belt.

Hughes played high school football at Austin High School and earned All-District and All-State honorable mention honors. He rushed for 1,412 yards and 19 touchdowns in high school and came to TCU as a star recruit turning down six other universities including Arizona State, Iowa State and Missouri.

In his time at TCU, Hughes continued his successful career, playing all four years as a Horned Frog. As one of only four true freshmen to see the field in 2006, he played in 10 games, racking up a sack resulting in a nine-yard loss, a solo tackle and an assist on a tackle. As a sophomore, he started only one game, but played in 13 with 29 tackles and one interception.

In 2008, Hughes really started to shine. As a junior, he started all 13 games as defensive end and racked up 52 total tackles for a total loss of 125 yards, 15 of those as quarterback sacks for a loss of 113 yards. He earned First-Team All-American by the Walter Camp Football Foundation, Second-Team All-American by the Associated Press and Mountain West Defensive Player of the Year. He was also the nation’s leader in sacks and forced fumbles with 15 and six.

Hughes entered the 2009 campaign with a lot of pre-season hype and expectations and didn’t disappoint. He racked up 58 total tackles and 11.5 sacks for a loss of 72 yards combined. He also ranked high among Horned Frog players for interceptions with three.

Horned Frog linebacker Daryl Washington was not selected in the first round of the draft Thursday night, but is expected to go in the second round later Friday night.

In high school, Washington played at Irving High School in the Dallas-Fort Worth Metroplex and earned Most Valuable Player and First-Team all-city accolades with 168 tackles and four sacks his senior year.

During his Horned Frog career, Washington saw action all four years. Alongside senior defensive end Jerry Hughes, Washington was one of only four players to see the field as a true freshman in 2006, when he made 16 total tackles and one forced fumble. He played in 13 games but did not start.

As a sophomore, Washington played in 12 games and made a total of 32 tackles and stood out on special teams with three punt blocks, which tied for top in the nation with Ohio’s Joshua Abrams.

Washington spent more time on the field as a junior, starting two games and seeing action in all 13. That season, he had a total of 13 tackles, one interception, four pass break ups and one forced fumble.

The real honors stacked up for Washington during his senior season at TCU in 2009. He led the Frogs in tackles with 109. He also had three interceptions.