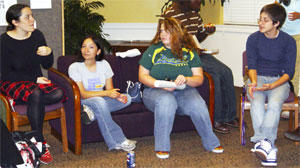 Gay-Straight Alliance praised University Ministries for supporting gay students on the TCU campus during its celebration of National Coming Out Day on Tuesday.”I’ve never seen a ministry as supportive as University Ministries,” said Talia Sampson, co-public relations chairman for GSA. “If you’re looking for a supportive network, there are people there to talk to.”

The social implications of being gay in society was the topic of discussion at the forum, said Jessica Fleming, secretary for GSA.

Approximately 25 people attended the forum, while more paused as they passed.

Among the speakers was Bayliss Camp, an assistant professor of sociology, who said the single most important thing gay people can do for social justice is come out.

“We call on others to treat us differently and ask them to think of us in a different context instead of abstractly like in ‘Will and Grace,’ and ‘Ellen,'” Camp said.

People are less likely to participate in homosexual jokes and use “soft homophobic speech” when they know someone who is gay, he said.

Sampson, a sophomore political science and news-editorial journalism major, said growing up, she was taught that God loves all people, but people have problems loving each other.

“We need to be loving of all people regardless of the decisions they make in life,” Sampson said.

Fleming, a junior radio-TV-film major, held up her rainbow-colored dice bracelet and said it has special meaning because every time she comes out to someone it, like the roll of a dice, is a game of chance.

“You don’t know if someone is going to befriend you for expressing who you are or if they will reject you,” Fleming said

Sampson said the turnout was larger than she expected. She said she was pleased that people did not just walk in and out, but sat down to listen, as well.

There was also a coffeehouse-style open mic Tuesday night for students to share their experiences.

Christopher Bell, a senior ballet and environmental earth resources major, said that at TCU, he feels accepted by everyone who knows him.

“People know I’m gay and they accept that I am,” Bell said.

Lana Hunt contributed to this article.