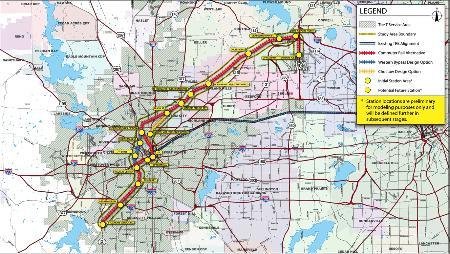 By the time the train whistle blows, current students won’t be around to hear it.

A regional commuter train that would run near campus by 2013 won’t benefit students now, but it will help future students connect to major parts of the city without having to drive, a university official said.

Don Mills, vice chancellor for student affairs, said part of the plan is to have an express bus that will connect students from campus to the nearest station.

“Traffic congestion is just going to get worse,” Mills said. “And the cost of fuel is going to probably increase again, so it will be convenient and inexpensive for students.”

Carl Weckenmann, the transit systems planner for the Fort Worth Transportation Authority (the T), said the 37-mile regional commuter train would follow existing rail lines from Sycamore School Road in southwest Fort Worth, through downtown Fort Worth, northeast to downtown Grapevine and into the north entrance of Dallas/Fort Worth Airport, as well as having a station on Berry Street close to campus.

Weckenmann said the T is applying for federal funding to cover about half of the cost needed for the $470 million project and hopes to have a successful application in by spring 2009.

If the T receives the needed federal funding, it will begin work on the system’s final design before moving into construction, Weckenmann said.

The other half of the funding will come locally through tax collected sales from key member cities and the city of Grapevine, Weckenmann said.

Eric Fladager, the comprehensive planning manager for Fort Worth, said the city encourages transit-oriented development that has higher density and mixed uses, such as commercial, office and residential condos and apartments.

“Really, it’s intended to be an environment that people will enjoy walking around,” Fladager said. “And of course that helps the businesses that are located there.”

Weckenmann said the proposed project has received mostly positive reactions from the public.

Elissa Redding, a freshman premajor from Fort Worth, said she often travels and a train that would take her directly from campus to the airport would be convenient.

Fladager said if the rail line is successful it will most likely lead to more regional rail projects.