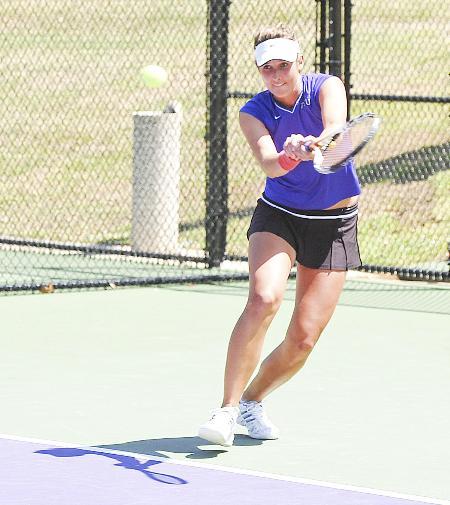 There must have been something in the air in Fort Worth this weekend because Horned Frog sports teams proved to be an unbeatable force on the diamond and on the hard court, where the women’s tennis team swept three conference foes in three days at the Bayard H. Friedman Tennis Center.

The No. 28 women’s tennis team started the weekend off strong with a 6-1 victory over No. 49 Utah team on Friday. Saturday proved to be a tougher match, but the Horned Frogs still managed to top No. 57 Brigham Young, 4-3.

The team finished off the weekend in style with a 7-0 trashing of the New Mexico.

The defeat of New Mexico on Sunday pushed the team’s conference record to 4-1 on the season. The only loss came to UNLV on the road March 28.

“We had to play good tennis to win both matches,” Hammond said.

Hammond said the home matches gave the team a better idea of what it needs to accomplish as the season winds down.

Hammond said this is the closest group that he has coached on any level.

“This group gets along really well on and off the court,” Hammond said.

The team was able to improve throughout its matches by staying mentally focused and playing to its own strengths, senior Macall Harkins said.

The main thing the team needs to do to get to the next level before the season ends is to push through its injuries and to maintain its focus despite the team’s youth, Harkins said.

Harkins said that though the team has two new freshmen, the overall chemistry has been great throughout the season.

Hammond said the group has a certain drive and focus that has helped them improve throughout the season. The earlier non-conference schedule has given them confidence heading into the final portion of the schedule and the Mountain West Conference Championships, he said.

The team will wrap up its conference slate with three matches spread over both Thursday and Friday against the Air Force, the Wyoming and Colorado State. The regular season will end when the team hosts Baylor on April 17 at home.