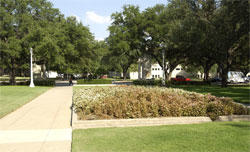 There have been several architectural additions to the TCU campus this year, but one has yet to be seen.The Veterans Memorial Plaza was scheduled to have been completed by this fall but TCU has yet to break ground on the project.

“We wanted to make sure the look is correct,” Roger Williams, a university trustee, said. “The plaza is going to be around for a long time and we want it to send the right message.”

The delay in the project was due to lack of money, Chancellor Victor Boschini said.

“We wanted to make sure that we were not spending the students’ money on this project but the donors’ money,” Boschini said.

The final donation came in at the end of July and we have reached our goal to begin construction, Boschini said.

“The west side of the development should break ground early next week,” Leeman said. “We have to wait until the third week of September on the east side because of the Brite Divinity School reception.”

Boschini said the plaza, symbolizing vetrans from WWI to the present, is part of an ongoing construction project designed to “beautify the campus.”

“The plaza will stand as a memorial for those who served in the wars and also add an impressive aesthetic aspect to the campus,” Boschini said.

The construction of the plaza will be done by architect Michael Bennett, who also designed the “Ray Gates” that were completed this summer, Leeman said.

The Veterans Plaza is supposed to start at Reed Hall and incorporate the fountain and pre-existing courtyard between the Joe Ann and Wayne Moore building and Mary Couts Burnett Library.

The plaza will be landscaped with trees and shrubs along with a limestone wall that will hold the names of TCU students who have fought in the wars, Boschini said.

Leeman said the plan is being readjusted according to the money there is for the project.

“It’s just a matter of taking out some ornamentation to reduce cost,” he said. “If all goes well we should move earth by early next week.”

He said the plaza is scheduled to be completed Nov. 11, Veterans Day.