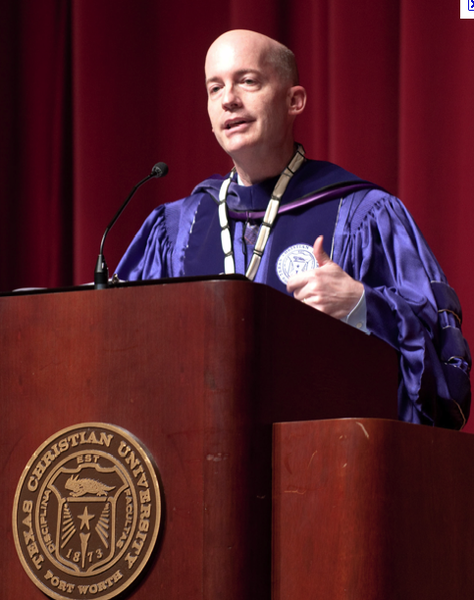 The exceeding of the campaign goal and the ranking of the school among the 100 best colleges of 2010 will be featured in the university’s 138th annual Fall Convocation.

Chancellor Victor Boschini will also discuss the relationship between TCU and Fort Worth over the past 100 years at the university’s annual Fall Convocation at 11 a.m. Thursday in Ed Landreth Auditorium.

Boschini will also highlight achievements by the university as a whole and present awards to faculty. Achievements include reaching the $250 million Campaign for TCU goal two years ahead of schedule and the ranking of the school as No. 99 among U.S. News & World Report’s Best Colleges 2010, according to a press release sent by the Office of Communications.

Fall Convocation marks the official opening of the school year. This year’s convocation will mark the start of the university’s 138th academic year.

Junior kinesiology major Mattie Brogdon said she attended the ceremony as a freshman.

“It’s pretty cool,” she said. “It reminded me a lot of something straight out of Harry Potter.”

Brogdon said she also enjoyed getting out of class.

Immediately following convocation, the annual Founders’ Celebration will be held in the Brown-Lupton University Union Ballroom.

All faculty and staff will participate in the ceremony and will lead the procession in full dress robes.

All students are encouraged to attend the ceremony, which will last approximately an hour, according to the Office of the Chancellor.