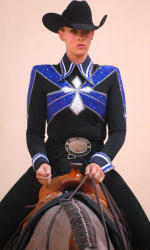 FORTWORTH, Texas — It’s the final Friday night at the Fort Worth Stock Show and 1,623 fans clad in Wranglers, boots and cowboy hats file into the John Justin Arena awaiting the big event. The air smells of cattle and carnival food, and excitement fills the arena. The TCU equestrian team prepares for one of its biggest competitions of the year, against rival team Texas A&M. Despite the pressure, senior Horned Frog rider Carrie von Uhlit rides out into the arena in perfect horsemanship position.

She makes her way around the arena on Patch, a horse she met just minutes before the event and described as a wild one. As a team they slide, stop, dodge and dash in a way comparable only to a beautiful dance between horse and rider. As she comes to a stop, her mind races to the next item on her busy schedule – for this isn’t her only obligation of the weekend.

She leaves and rushes back to San Angelo for her next competition in the Working Cow Horse World Championships, keeping her phone handy to text-message teammates point by point throughout the night, cheering them on from a distance.

But that’s just another day in the life of von Uhlit.

She lost a point in the reining event that Friday night to A&M’s Abigail Grabein. Losing is a phenomenon foreign to von Uhlit in most events, especially in that arena. She won her first world championship title in the English events at the John Justin Arena in 2004. That milestone championship multiplied that week, and she left the event with four. After that, she just kept winning.

She has been riding since she was 2 years old. In her earliest memory on horseback – at age 4 in a Showmanship competition- she was a champion.

None of her championships would have been possible if she had never gotten on a horse. Von Uhlit can’t remember the first time she rode a horse, but her aunt Lise von Uhlit can. She was barely 2 years old and sat on the horse by herself, guided by her aunt who walked alongside the horse looking up at the cheerful toddler.

Currently a horse trainer in California, Lise von Uhlit taught her niece almost everything she knows about horses and has been there in the stands her whole life.

“I am her biggest fan and I am her hardest critic,” Lise von Uhlit said.

While she has raked in the awards throughout the years, the 22-year-old has also suffered a number of injuries. Von Uhlit has been kicked more times than she can count and bucked off horses on a regular basis. She has gotten broken bones and concussions.

None of these accidents caused her to fear riding, because as she put it, “riding is more a hobby than a sport I train for.”

Lise von Uhlit took her niece’s commitment to the horses a step further, saying, “It’s not just a hobby, it’s her life.”

Her love of horses kept her riding, but her passion for perfection kept her pushing forward and trying new events. She has competed in every category at the NCAA level during her time at TCU. In fact, Von Uhlit remains one of only two NCAA riders in the history of the sport to win a Most Valuable Player honor in all four categories: horsemanship, reining, equitation over fences and equitation on the flat.

Winning all of these awards comes not only from training, which von Uhlit does plenty of riding six hours or more during the week and sunrise to sunset on the weekends, but from being able to achieve that level of communication with another animal, she said.

“For me it’s really a natural thing…I just try and show them that they can trust me and that I’m not going to hurt them,” she said.

In most sports, athletes compete with a ball, a bat or another piece of lifeless equipment that can’t make its own decisions. In equestrian, the athletes must rely on another living, breathing creature to succeed, making trust a key component to the sport, she said.

Lise von Uhlit, who has trained and ridden horses her whole life, said trust and respect are both important when working with horses.

“I think there is a fine line between trust and respect,” she said. “A horse needs to trust you, but it also has to have respect. We ask these horses to do things that are just thoroughly unnatural…I think trust is huge.”

Von Uhlit said building trust with her own horses isn’t difficult. At the college level, however, trust is different in the sport of equestrian. Riders compete using the horses at the host school, giving them only four minutes to acquaint themselves and prepare to ride.

Most horses used at the NCAA level are donated to schools. Lise von Uhlit said that because these horses are donated, there are some who have their fair share of what she called “issues.” She said that it takes the horseman’s skill to a whole new level when competing at the college level.

This skill is something that, according to her aunt, von Uhlit not only possesses, but masters.

Von Uhlit completed her college equestrian career this past weekend at the 2010 Varsity Equestrian National Championships.