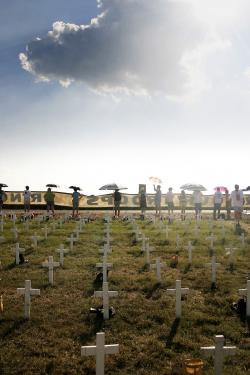 For Army Staff Sgt. Richard Brown, planting one white cross represented far more than a commemoration of a life lost.Marine 2nd Lt. Therrel Childers, Brown’s brother-in-law, died March 21, 2003, making him one of the first recorded casualties of the Iraq campaign. Even though Childers died more than two years ago, Cindy Sheehan’s recent protests in Crawford have resurrected his name.

Childers is one of many armed forces members memorialized at Camp Casey, Sheehan’s temporary site set up near President George W. Bush’s ranch in Crawford. Both a cross bearing Childers’ name and a photograph have been displayed, along with those of 999 others, to recognize the first 1,000 American casualties in Iraq.

Brown, who lives in Fort Hood, reacted not with appreciation, but indignation.

“I heard about it, and I came and pulled his cross,” Brown said. “I’m up here representing my family.”

Brown, an active Army enlistee, said he sees Sheehan’s group’s use of these names and faces as an affront to the ideals they fought and died for.

“They don’t know a tenth of what’s going on (in Iraq)” Brown said. “They only know how many people are dying.”

Brown said he not only had the local sheriff remove Childers’ cross and picture from Camp Casey, but personally relocated it to Fort Qualls, a camp of Bush supporters in downtown Crawford.

Fort Qualls, set up by Gary Qualls, whose son was also killed in Iraq, has a growing population of relocated crosses.

Temple resident Kathleen Brown, who is not related to Richard Brown and was on hand to witness Childers’ cross rededication, said Fort Qualls exists to represent Sheehan’s growing opposition.

“We believe in a cause – we believe in the other side,” Kathleen Brown said. “We think this is a step in the right direction.”

Tammara Rosenleaf, a volunteer for Camp Casey, said she takes such opposing feelings in stride.

“Every family has a right to their feelings,” Rosenleaf said.

“We notify the sheriff, and he searches the 1,000 crosses and finds the names,” Rosenleaf said. “We take down the cross and picture, and the sheriff returns them to the family. We also have a list of names that we have displayed and we remove them from that list so they’re out of circulation.”

Richard, however, said he wasn’t convinced.

“They don’t want to talk to me over there,” Richard said. “But someone told me that they had put (the cross) back up, so I’m going over later to check.”

Richard said he refuses to allow the memory of his brother-in-law to be misused.

“I respected my brother-in-law,” Richard said, “and I respect what he did.”