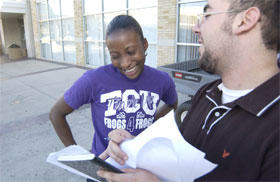 On the field, she has been described as a tiger and one who is tough to beat when she is “in the zone.” Off the field, people use lighter terms, such as “outgoing” and “engaging” to describe her. This is Virgil Hodge, a redshirt sophomore sprinter for TCU’s women’s track team, who is looking to make an impact for not only this season, but also for seasons to come.

Her friendly demeanor mixes well with the confidence she exudes in her genuine opinions.

“I am looking forward to winning conference,” Hodge says with a grin on her face.

Hodge’s story begins on the Caribbean island of St. Kitts, or as she likes to call it, “home.” Here, she began to realize her special ability and started running when she was only 5 years old. In St. Kitts, “sports days” were held as athletic competitions between members of each house on the island. Locals started to take notice of the young girl with the exceptional talent when she would win handily.

Despite the early success during her time at St. Kitts, Hodge suffered a serious blow to her psyche, as a back injury early in her high school career was considered career-threatening.

“The doctor told me I would never run again,” Hodge said.

She cried at the thought of not being able to live out her childhood dream. After vowing not to give up on her hopes and dreams, Hodge began rehabilitation and successfully returned to full form.

“The experience definitely made me mentally stronger,” Hodge said.

After her comeback from the back injury, Hodge took the next step in her progression by moving to the Bronx, N.Y., to compete for Washington Irving High School in Manhattan. There, she was coached by Monica Stevens, an ’84 Olympian in the 400-meter race, and mentored by Brady Crain, a gold-medal winner at the ’84 Olympics in the 200-meter race.

Despite the amount of time it took for her to get from Manhattan to the Bronx, Hodge was still dedicated to her school and team.

“She took two trains daily to get to school, and even more to get home, depending on where we had practice,” Stevens said. “Her travel time was about 45 minutes, if all went well.”

Due to the lack of funding for the program on the part of Washington Irving, Hodge and her teammates were left to earn everything they desired.

“The financial support that Virgil and her teammates received from the school was minimal, and most of the money came from funds from the juice machines,” Stevens said. “They basically had to fund raise for entry fees, travel, hotels, uniforms or anything else they wanted.”

One of the things that separates Hodge from her peers might be her willingness to sacrifice for success, as evident by her influencing her teammates at Washington Irving to compete for a shot at going to the state championships, even if it meant missing their prom. Hodge said it wasn’t even a question of whether they should compete.

“Virgil called them together and told them in no uncertain manner that if anyone graduating that year had any plans on going to the prom and making her miss the city or state championships, they had better forget it because she was going and she was not going alone,” Stevens said. “There was no prom for the team, but there were several championship titles.”

Upon graduating from Irving, Hodge embarked on a new challenge at TCU. Much like her time at Irving, Hodge is being mentored and coached by those who have had experience training with Olympians. Head coach Darryl Anderson has coached several Olympians over his coaching career, and assistant coach D’Andre Hill was an Olympian herself in 1996 in the 100-meter dash. Even though Anderson said he is impressed thus far with Hodge’s work ethic on the field, it is Hodge’s work ethic in the classroom that has caught his eye.

“Ninety percent of our conversations last year were about being a student,” Anderson said. “She wants to be classified truly as a student-athlete.”

Hodge, who was redshirted last year after gaining All-American honors for running anchor in the 100-meter relay team in 2004, is looking as if she is preparing for a breakout season. She was recently named TCU’s co-student-athlete of the week for her two first-place finishes at the Wes Kittley Invitational.

“She’s got an opportunity to be one of the best sprinters to come through TCU,” Anderson said. “The ball is in her court.”

Even though Anderson said that Hodge still needs to improve on her overall strength levels, he feels that she is moving in the right direction.

“If she continues to progress, the sky’s the limit for her,” Anderson said.

Once 2008 comes around, a trip to Beijing for the ’08 Olympics to represent St. Kitts isn’t too far from Hodge’s mind.