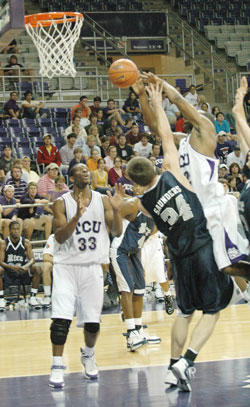 Walking past the slew of tents set up outside of Daniel-Meyer Coliseum before Tuesday’s men’s basketball game, one thing was clear: “D-Ville” had arrived.And after last night’s performance against the Rice Owls, the term honoring head coach Neil Dougherty’s brand of basketball might be here to stay.

Behind a stifling defense and an offense that made the most of its opportunities, the Horned Frogs would roll to a decisive 76-49 victory against Rice on Tuesday to improve to 2-0.

TCU’s swarming pressure defense had the Owls frustrated the whole night, holding Rice to a 24.1 percent shooting from the field. TCU’s defense handled Rice on the glass with a 59-34 rebounding edge.

Dougherty said he liked the pace the defense set with full-court pressure all game long. He said the team is trying not to have opponents beat them with their bread-and-butter plays.

“This defense is predicated on ball pressure extended in the pressure in the passing lanes and trying to speed people up,” Dougherty said.

Despite the 27-point rout, only junior guard Henry Salter and senior forward Alvardo Parker had double-digit scoring nights at 11 and 10 points, respectively.

With the balanced scoring distribution throughout the course of the game, the Frogs found a good chunk of their offense in transition off turnovers and on second-chance points.

For the game, TCU would blank the Owls 11-0 on the fast break and converted 20 points off of second-chance opportunities compared to Rice’s eight.

Freshman point guard Mike Scott said he liked what the team was able to do in rotating players. He said the current point guard rotation of sophomore Jason Ebie, sophomore Martiese Morones and himself can make for a tiring night for the opposition.

“By the time, I come back in or (Martiese) comes in or Jason comes in, we look at them and they got their head down, they’re wheezing, and they’re tired and we’re like, yeah, we need that ball,” Scott said.

The bench played a huge role in Tuesday’s win, with seven players chipping in for 35 points.

Bench players such as redshirt freshman center Luke Tauscher chipped in on the defensive side with a team-high 12 rebounds.

Tauscher said the energy from the 3,088 fans in attendance brought a different kind of atmosphere to Daniel-Meyer Coliseum last night – something he and his teammates hope to continue this season.