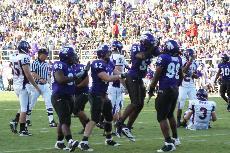 Matt Panfil probably won’t read this article. He says he tries not to read anything because he and fellow defensive end Jerry Hughes don’t need to be told that they have huge shoes to fill this season left by their predecessors Tommy Blake and Chase Ortiz.

Shaquille O’Neal and his size 22 feet would have trouble filling those.

Panfil, a fifth-year senior, said he puts enough pressure on himself to do his best.

The two took a positive approach to their roles behind the two stars in the early years of their career by trying to learn from them, Hughes said.

Hughes said Ortiz would emphasize the technicality of the game while Blake encouraged them to use their natural ability, telling Hughes that if you can run by your man, then do it.

During Hughes’ freshman year, he and Blake got into a discussion about who was the fastest defensive end. The dispute ended with Hughes putting his 4.5 second 40-yard dash time against Blake in a losing effort.

Both Blake and Hughes shined as running backs in high school before making the move to defensive end. During his senior season, Hughes compiled 1,412 yards and 19 rushing touchdowns, as well as three more receiving. He had an idea that he’d be changing positions because the team recruited him as a tailback and defensive end, he said.

“Then when I came here, my number was 98,” Hughes said. “I really didn’t see too many running backs with the number 98, so I kind of slowly got the hint there.”

“That’s a guy who came out of high school running a 4.5 who thought he was a safety,” head coach Gary Patterson said. “We didn’t think that was the case so we moved him to linebacker and now to defensive end. He gave up personal goals to help the team. He has risen to the occasion.”

As a local product of North Crowley High School, Panfil helped lead his high school squad to its first state title. At TCU, he played in all 13 games in 2006 as a reserve defensive end and special teams player. He made the switch to defensive end from linebacker in spring of 2006.

When Hughes entered the program as a freshman, Panfil, in his third year in the system, was active in helping the converted running back to learn the new position and defensive scheme by being more hands-on then many other players, Hughes said. Panfil’s mentoring helped to foster a big brother relationship between the ends, Hughes said. The two are also roommates at away games.

That relationship helped the duo coming into the season.

“It wasn’t just one player having to step up,” Hughes said. “Both ends have to step up. Both of them have to do better.”

Through four games, Panfil has accumulated 3.5 sacks to lead the team with Hughes right at his heels with three. The two have added seven and 5.5 tackles for loss, respectively, which is also first and second on the team. The defense leads the nation yards per game allowed.

“If everyone’s going to kind of put us in the spotlight then we might as well shine in it and do our jobs,” Hughes said.

For week one of the season, Hughes was honored as the Mountain West Conference player of the week with three tackles, a forced fumble and recovery and an interception. He’s been responsible for turnovers in each of the first four games.

Hughes had a brief flashback to his days as a running back when he snagged his second interception of the season against SMU on a screen pass and took it back 24 yards for a touchdown.

“I just pictured myself back in my high school days tucking that ball and taking it for a long run,” Hughes said, smiling while reminiscing on his first college touchdown.

Not to be outdone, Panfil earned Co-Defensive Player of the Week honors week three, following the Stanford win. He tallied five tackles, four for loss, a forced fumble and recovery and 3.5 sacks. The award gave Hughes the opportunity to return the favor for the teasing Panfil dished out after week one.

“It doesn’t always work out.” Panfil said. “Sometimes you get a great pass rush and they throw the ball or you bust through the line the guy cuts back before you get to him. Everything aligned that week. I was just in the right place at the right time.”

But the roommates aren’t interested in the individual accolades.

“I just hope we keep putting our team in a position to win” Panfil said. “That’s all I care about. I don’t care if I don’t get any more tackles this year if I do my job and we still win. Stats aren’t a big deal to me. It’s all about the win.”

The two said it’s too early to say how well they’ve answered critics and filled those empty cleats from Blake and Ortiz, but know how they want to answer.

“I figure the perfect answer to filling their shoes would be an undefeated season,” Hughes said.