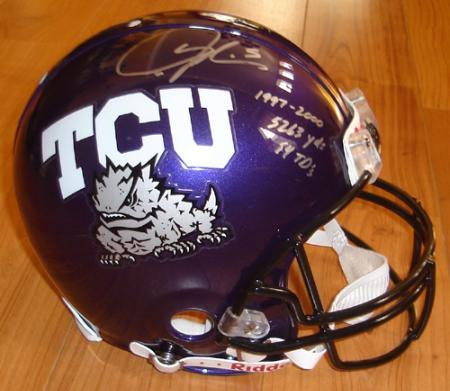 Whether it’s a collector, graduate, current student or just a fan, people want their piece of TCU.

The success of TCU athletics in recent years has resulted in TCU paraphernalia becoming higher in demand in the Dallas-Fort Worth area and a popular choice among college sports fans outside of Cowtown.

“The success of TCU athletics has led to an increase in popularity in TCU merchandise on a local, regional and national level,” said Jason Byrne, director of marketing for TCU athletics. “Both Nike and Under Armour have grown their product line of TCU merchandise.”

Several TCU teams having recent success are the football, baseball and women’s basketball programs, all of which have reached the postseason every year since 2005.

In 2005, TCU athletics switched to the Mountain West Conference. In the football team’s first two seasons in the league, it went 16-2, along with a perfect 8-0 record in conference and the conference title in 2005. It was the third time a team went undefeated in the history of the MWC and the first time a team went 8-0.

This consistent success has put TCU in the spotlight, Byrne said.

“Just last spring, TCU was selected to be a part of a college retail company called College Vault Vintage,” he said. “Universities were selected based on their popularity and school history.”

The program is a unique opportunity for the universities involved to have vintage merchandise created, Byrne said.

“The university can have the opportunity to create merchandise that has a more distinctive look,” he said. “(It is) a chance to put together historical images and the trademarks of the university, to give fans a different choice.”

In addition to success on the field and in the retail market, TCU is also making its mark in the virtual world.

On Jan. 14, a 1994 TCU Football Southwest Conference Championship Ring was purchased on eBay for $521.99 by a college sports memorabilia collector, 41-year-old Jason Steele, of Arkansas. After 27 bids, the ring’s seller, 33-year-old Victor Ortega of Houston and owner of Diamond Jewelry and Loan, found his buyer.

“The TCU ring that I sold on eBay was one that I actually bought from someone who came in my store and sold it to me,” Ortega said. “It was the first time I had put this particular ring on eBay. It sold in a little over a week, not bad,” he said.

Steele, a University of Texas at Austin alumnus, said the newly acquired ring is one of his many sports memorabilia items. He also has the first Big-12 Championship Ring, a rare Southwest Conference clock and a 1999 UT championship ring from the Cotton Bowl.

He said he was a fan of the majority of the other teams that used to be in the SWC.

“I love TCU,” Steele said. “The campus and the stadium always look good, and they had some of the nicest fans.”