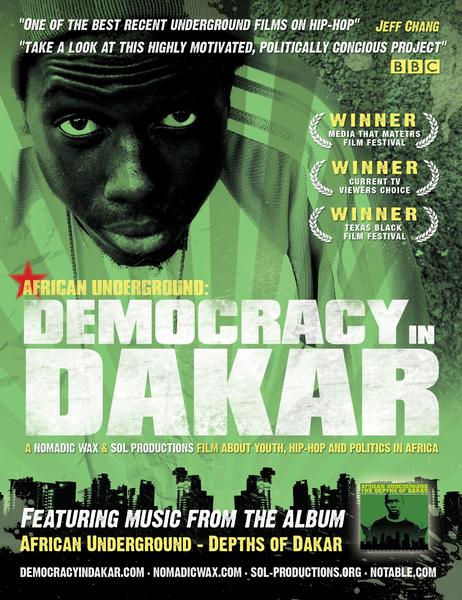 An on-campus screening of the award-winning documentary “African Underground: Democracy in Dakar” will show the TCU community how closely connected hip-hop music and politics can be.

John Singleton, director of International Services and the KinoMonda World Cinema project, said “Democracy in Dakar” explores the role hip-hop culture and students played in bringing democracy to a Muslim socialist government and shows the nonviolent change of order. The film explores how the underground hip-hop movement was an integral part of the 2007 presidential election in Dakar, Senegal.

April Brown, assistant director of Inclusiveness and Intercultural Services, said, “It’s going to be an experience in culture. And I wouldn’t have imagined hip-hop being a part of the culture of Dakar, especially as it involved politics.”

Singleton said the plan at the beginning of the hip-hop movement in Senegal was not to elect a president. He said around the same time the movement was happening, the opposing candidate reached out to the activists and as a result, the hip-hop community then supported him as a candidate.

“The hip-hop movement was hungry for change,” he said.

Singleton said the film shows the events of the election from two perspectives. He said it follows both the candidate, Abdoulaye Wade, and various hip-hop artists of Senegal.

He said the film was not originally a documentary. The hip-hop company Nomadic Wax started out just doing a story on Senegalese hip-hop and found the political story that then turned into this film.

Singleton said he thought it would be interesting for a few reasons.

“When hip-hop was emerging as an artistic expression, in [America] there was a hope that it would become the language of informed dissent, and at times it is that,” Singleton said. “That’s the role it played in Senegal, completely. [It] shows you a different way [hip-hop] could have gone.”

Singleton said this movie is important for people to see, especially on a college campus.

“Education is all about the boundaries you push,” he said. “This is a film about pushing boundaries, about change.”

He said the film would give TCU students a chance to identify with students in Senegal.

Singleton said he works with world cinema and was approached by the university about adding something to Black History Month on campus. He said the African Heritage Organization and the International Student Association are planning on attending. Singleton said he hopes people who see the movie will come away with a piece of life in Senegal.

Melissa Morales, a freshman pre-major, said she was interested in understanding the different experiences of kids in other parts of the world. She said it would also give her a better understanding about other cultures and how other people live.

Singleton said there are usually many students and 50 to 70 people from the community at the film showings, so he said he hopes the room will be “bursting at the seams.” After the film is shown, he said it will be donated to the TCU Library for anyone to check out and see.

Hip-hop and political change in Senegal

Open to all students, faculty, staff and the TCU community.