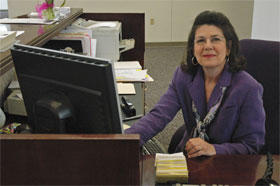 Since her graduation from TCU more than 26 years ago, Terri Cain has continued a Horned Frog tradition with her children.Cain, a secretary for the athletics department in the Justin Athletic Center, is part of a household where purple is the color of choice. Cain has three children: a daughter who graduated from TCU’s nursing program in December 2004, a son who is a senior business major and a daughter who will attend TCU in fall 2006.

Cain and her husband Frank, who have been married for 28 years, are both graduates of TCU. Her husband is an attorney with ShannonGracey law firm.

Cain said that because of the tuition benefits offered to employees, her children can attend TCU without having to pay tuition.

“TCU has been very good to me and to my family,” Cain said. “We love TCU, but one of the reasons I came to work at TCU was we had all these tuitions coming up.”

Cain said that before coming to work at TCU she spent most of her time with her children.

“For many years I stayed home with my kids; it was fun,” Cain said.

The Cains’ son, Ben, said he came to TCU in part because of his parents’ opinions about the university.

“My parents spoke very highly of TCU,” Cain said. “So it was a real pleasure to get accepted and carry on the tradition.”

Cain said his mother is always looking to help others.

“It’s good to know that she is there if I ever need her,” Cain said. “She is not a bad cook either.”

After attending the University of North Texas from 1971-1973, Terri Cain came to TCU to finish her degree in English. Cain, who graduated from TCU in August 1979, said her friends motivated her to finish college.

“When I looked around and realized that all my friends had graduated from college and I hadn’t finished, I decided to come to TCU,” she said.

Cain, who has been part of the athletics department for five years, said the athletes make the job rewarding.

“Working in the athletics department is a lot of fun; there are great people here,” she said. “Athletes are good kids, so it’s nice being around the kids.”

Cain said her daily routine consists mostly of answering the phone and making sure there are enough supplies in the office, but her job also allows her to meet athletes.

Athletics Director Danny Morrison said Cain does a good job of greeting people as they come in.

“She has a great attitude, is a hard worker and is really good with people,” Morrison said. “That’s a pretty busy area, and she’s kind of the front door of the administration offices.”

“I don’t know that she ever has a bad day,” Bailey said. “She is always pleasant and uplifting to be around.