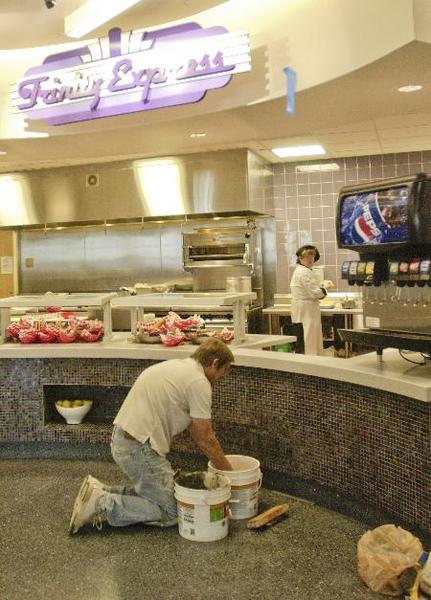 Fans of the Food Network’s Iron Chef America series will get a chance to live the experience at Market Square later this month.

The introduction of dinner shows is just one of the many changes implemented after fall break, said Rick Flores, general manager of dining services.

The Expeditions area will have a high-definition camera with speakers to showcase live dinner shows, such as Iron Chef at TCU, Flores said.

“I’ve been talking to SGA and other organizations, but we haven’t finalized anything,” Abato said.

According to the official Web site, Iron Chef America is based upon the Japanese version of Iron Chef. In the show, chefs compete against other chefs who are considered the top chef in their cuisine of choice. The rivaling chefs compete in a large kitchen where they must use a secret ingredient in all of their dishes.

Abato said she has also been reaching out to local chefs to be guest teachers for the nutrition class Quantity Foods.

Students in the nutrition class learn about technique in the kitchen on Tuesdays and Thursdays, Abato said, while on Fridays guest chefs will come in and work with the students.

Other changes to Market Square and 1873 were considered after receiving feedback from students, Flores said.

Students can expect to see a make-your-own wok station in Market Square and a rolled sushi station in 1873, Flores said.

“What we really want to do is let students know that they have options,” he said.

Students can now fill out a take-out form on the Dining Services Web site.

“Students who can’t make it to the dining areas because they are sick or don’t have time will benefit from this because they still have access to meals,” Flores said.

According to the Dining Services Web site, take-out meals can be pre-ordered by filling out the request form that is available online and submitting it to Residential Services. Take-out orders must be submitted to and approved by Residential Services 48 hours in advance. Students who are sick can turn in their forms for same-day approval, and take-out dinners for sick students may be picked up later in the day if necessary.

Breakfast and lunch take-out orders can be picked up from 7 a.m. to 9 a.m. in the Corner Store, according to the Web site. Students pay for take-out by swiping their IDs, and the service is only offered to students with silver, gold and platinum meal plans. Dining Services is also adding about 80 more seats to the main dining areas, according to an e-mail sent to residents last week.

The changes have been met with mixed feelings.

“I think adding extra seating is a good thing,” said Donnell Chandler, a freshman prebusiness major. “It is kind of cramped in there.”

But some said the changes made by Dining Services are not enough.

“I feel like they should change the meal plan too,” said Jessica Heroux, a sophomore speech language and pathology major. “I would like to have more freedom on where we can use Frogbucks, or maybe just have more Frogbucks and no swipes.”

Flores said he wants students to know Dining Services is listening to their concerns.

“We understand that students are upset about the meal plan, but these things take time to fix,” Flores said.