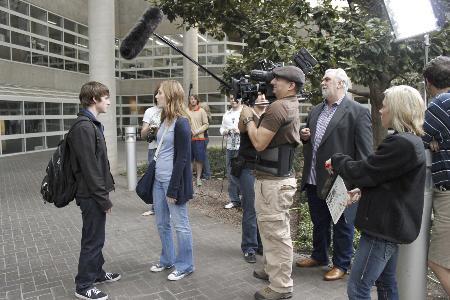 Rod Hardy, a film and television director, told students in a directing workshop Tuesday night that the key to directing was passion.

“Without passion nothing happens… work doesn’t keep growing,” Hardy said. “You can sit there and be glass-eyed about the fabulous film industry, but it is a cutthroat jungle.”

Hardy was the film, television and digital media department’s Green Chair speaker. He directed episodes of television shows including “Burn Notice,” “Leverage,” “Battlestar Galactica,” “Saving Grace” and “The Mentalist,” as well as films such as “December Boys.”

Hardy used his personal experiences as a director to give students advice about the film industry.

He said it is important to learn every aspect of the film industry. Every profession within the industry operates in a different way, so familiarity with how each one works is vital to success on a film or television production set, he said.

Hardy said auditions were some of the hardest steps in film making. He said students should take acting classes to improve directing skills during the audition process. Learning how to act would help directors understand how nervous and uncomfortable actors feel in an audition.

“Make the actor feel like at that one moment they’re sitting in the audition room, they are the most important person because they really are,” Hardy said. “If you create an atmosphere that is tense and uncomfortable, then you’re going to end up with somebody not really delivering their best work.”

Getting rid of arrogance was also necessary for directors to create a comfortable auditioning atmosphere, Hardy said.

One of the scenes Hardy directed for students was from a film he would direct next May or June titled “It’s All Greek to Me.” He encouraged the actors to slow down their acting and deliver the lines realistically, which was advice he frequently gave, he said.

Charlotte Berry, a sophomore FTDM major, said she was impressed with Hardy’s workshop. Watching Hardy interact with the actors and build up each scene was interesting, she said.

“Being a TCU junior film major, I think that the workshop was very exciting,” Gawloski said. “I can’t wait to attend the rest of his workshops later this week and see what else he has to offer.”

In addition to the directing workshop, FTDM showed a screening of “December Boys” Wednesday night.