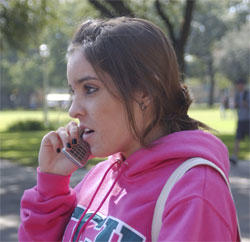 If you’ve ever lost cell phone signal on campus, TCU Connect would like to know about it.TCU Connect is the communication arm for students that provides voicemail, television and long-distance service to the campus, said Travis Cook, director of business services for TCU Connect.

The majority of complaints about cellular signal come from faculty and staff members, not students, Cook said.

“It would be very helpful for students to e-mail us and let us know the dorm or room number where reception is weak,” Cook said.

The Sid Richardson Building and the basement of the Tucker Technology Center are just two of the problem areas Cook has been informed of.

Cook said he is focusing on increasing signal in residence halls because not being able to use cell phones is a safety concern.

A phone is your lifeline to 911 if there is an emergency in the dorm,” Cook said. “If students can’t use phones, then it puts them in danger.”

“I usually have to stand next to the window to talk,” said Becker, who lives in Milton Daniel Hall. “If I don’t, then calls drop or they are full of static.”

Becker said he didn’t know he could report his problems to TCU Connect but now plans to send an e-mail.

Cook said the university is discussing options with companies that work to improve signal within buildings.

One of those companies, NextG Networks, specializes in increasing cellular service in buildings. According to the NextG Networks Web site, the company installs wireless receivers on campuses that eliminate the need for large cell towers or roof antennas.

Cook said Cingular will also come to campus to check for weak spots, though he is not sure when.

Cingular is the main service provider for the TCU area and there are three cellular towers providing service to campus, Cook said. Last month, the company adjusted the towers to increase reception at the intersection of University Drive and Park Hill where reception was often lost, he said.

The TCU Computer and Telecommunications Committee, which consists of 13 faculty members, listed installing cell phone repeaters, which are devices that send signals from one point to another, where there are signal problems as one of its planning points in a meeting last April.

Arthur Busbey, the committee’s chairman, said the committee hopes to work toward installing more repeaters so people can use BlackBerrys on campus.