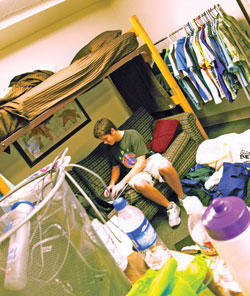 While some students study in their living space, usually in dorm rooms, some TCU students are living in designated study rooms.Some male students were placed in study rooms because of an increase in applications, said David Cooper, associate director for residential living.

He said there are about 20 male students without “fixed housing,” all of whom are men. There are a few vacancies in the female dorms and in the upperclassmen housing, Cooper said, however, residential services cannot place the students in these dorms because they don’t fit the classification requirements to live there.

Dean of Admissions Raymond Brown said he had requests for more male students on campus from many people and that TCU is trying to increase diversity, including gender.

“The first thing – which is a great thing – is that our admissions office is being more selective, but the yield is too high,” Cooper said. “So there are not enough beds for them in their own room.”

Cooper said TCU wants students living on campus to experience the “campus life” and all the amenities that go with it. He said many schools across the country are placing students in study rooms and lounges because of a lack of space.

Some schools, Cooper said, are placing three students to a room to be sure the students get the campus-living experience.

Sam Thompson, a freshman prebusiness major, said TCU told him he would be living in a study room a week or two before school started.

Thompson and his roommate, Spencer Youtsey, said they each have their own bed, two small tables as desks and share a TV. They have no closets or windows, Youtsey said.

Even though Thompson was on the waitlist for admissions, he said, he never wanted to go anywhere else but TCU. Living in a study room was not going to keep him from his first-choice school, he said.

Cooper said they determined who would be placed in the study rooms by when students turned in their application.

Youtsey and Thompson said they pay around $1500 to $1600 a semester to live in the study room, which is about half of the cost to stay in a Waits dorm room.

Youtsey said he tried to move in with a friend down the hall, but before he could talk to the hall director, another student had moved in already.

Cooper said when rooms become available, they offer the room to students based on space, the living environment and the amenities of the room and dorm.

He said some of these students were offered a room later when they became available, but declined. Cooper said he knows four men in Clark Hall who don’t want to move because they like their living situation.

Thompson said despite the unique housing arrangements he and his two roommates get along just fine.

“They said only two weeks at first, but then said it’ll be indefinite,” Thompson said. “I’ll stick with it for the semester, but if it’s for next semester, then I won’t be very happy.”

Youtsey said he loves Waits and would like to stay there, as well as stay with his roommates.

“If they found another room, we would debate going because we are already friends,” Youtsey said. “We are a lot alike.