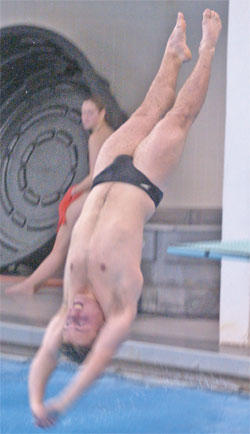 After the ripples in the pool smooth over and the swimmers retreat to the locker room, four athletes enter the Rec Center Gymnasium and begin their training. Following a brief adjustment of the gears on the 3-meter springboard, sophomore diver R.J. Hesselberg silently poses on the end of the turquoise board. A small hop, followed by a skyward leap, and suddenly the 20-year-old is flying through the air in a series of acrobatic twists and flips.

Hesselberg, along with sophomores Claudia Combs and Hannah Hale and freshman Jennifer Ferguson, makes up the TCU diving team.

In her first year of collegiate diving, Ferguson has continued making her mark as a leader and competitor, diving coach Wayne Chester said.

“I was a gold medalist at the Pan-American Juniors in Mexico City in 2001,” Ferguson said.

Since then she has taken second place at the World Junior Trials in Aacher, Germany and earned Mountain West Conference Diver of the Week honors on four occasions last season.

For Ferguson, Hale and Combs, diving was not their original athletic interest; they were all active gymnasts.

“I have only been diving for four years,” Hale said. “I was a gymnast and got hurt, and I swam for about six weeks and saw that diving was more fun.”

Hesselberg brings the most experience to the team with 10 years of competitive diving under his belt.

“I saw people diving during swimming lessons, and I realized I hated swimming, so I started diving,” Hesselberg said.

Both Ferguson and Hesselberg were international recruits to the TCU squad from Canada. Hesselberg is from Saskatoon, Saskatchewan, while Ferguson is from Montreal, Quebec.

“They were given the opportunity to get scholarships and it worked out real well,” Chester said.

Former TCU divers from the Houston area helped draw Combs to the university.

“I knew Chad Hummel and Kelly Seely, and I used to be on a dive club with them back home,” Combs said.

The H20 Frogs diving team joins the San Diego State Aztecs as the only two conference teams to have no upperclassmen on their roster, according to themwc.com.

“Their future is awesome as they are a young team scoring very high in conference,” Chester said. “Hannah has come a long way in a year and a half and R.J. has won Diver of the Week honors once this season.”

Each diver brings a unique set of attributes to the squad, Chester said.

“R.J. is the cinder block of the whole team; Claudia is a cheering part of the team,” Chester said. “Jennifer is a leader in her own right and helps with coaching the other divers, while Hannah is very enthusiastic and determined.”

As the only member of the men’s diving team, Hesselberg has to compete against squads of three or four other men’s divers.

“I don’t feel much pressure, I go out there and do my thing,” Hesselberg said. “Even if I were injured, I’d still dive, I always do.”