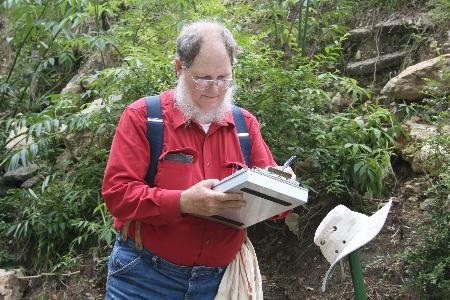 While standing on a mountaintop surrounded by mountain peaks with no artificial light in view, Tony Burgess experienced a revelation. The environmental scientist still identifies this instant as the moment he found his passion for nature.

“Times like those keep me coming back for more,” he says.

Tony Burgess, the self-identified “uber-dork” of TCU, is a nationally known naturalist – an expert in the study and research of nature.

His students, however, simply call him a friend.

“He sincerely cares about each one of his students,” said Helen Byrd, a junior studio art and photography major.

As the head of TCU’s Biodiversity Institute for Environmental Studies, Burgess is involved in field research that ranges from bird-banding to fungus tutorials.

His students say his rough “mountain man” appearance easily distinguishes him from the typical TCU professor. As a professor who says he would rather be teaching hands-on at places, such as the Fort Worth Nature Center and Refuge, Burgess is not likely to dress up for class. Instead, he lectures in his suspenders and hiking boots.

“It’s as if he wants to be ready for the moment someone calls him to go hike through the woods,” Byrd said. “He’d be ready.”

Byrd said she laughs every time she sees Burgess driving to work.

“He drives this tiny, little green environmentally-friendly car,” she said. “He’s just the epitome of the crazy, old environmental scientist.”

Although his students tease him for his eccentric lifestyle, he says it just comes with the territory.

While the popularity of the national movement to “go green” excites Burgess, he says it is important to remember the bigger picture.

“It is my hope that people will begin to make wiser choices regarding the coexistence between the two. It’s too late to avoid change,” Burgess says. “We must adapt to it.”

Burgess says he helps his students develop practical ways to encourage daily interaction between humans and their environment. He says his ultimate goal is to instill his own appreciation of nature in his students.

“He has helped us to understand that being environmentally conscious is not just for ‘hippies,'” Byrd said. “He is teaching his students to appreciate our environment and its beauty while learning how to live in harmony with it and care for it.”

Ellen Schwaller, a senior environmental science major, identifies Burgess as one of the facilitators of the current movement to “go green” in today’s society. She said it’s because of people like Burgess, who inspire others to live a simpler lifestyle, that the “green movement” is gaining support worldwide.

“I do believe that our society is once again finding a group of concerned and passionate young people seeking peace and healthy communities,” she said. “It is just starting to bud.”

In his classes, Burgess talks about the concept of a “re-revolution,” a current movement inspired by the hippies of the ’60s and ’70s, who are mentoring today’s youth.

Burgess said the movement is different this time because it is global in scope.

“This time around, aging hippies will be able to inform a little better,” he said.

Burgess said the Clean Water Act, which aimed to clean up the nation’s water supply, was a positive result of the initial movement. In the end, however, the movement did not accomplish what it set out to, he said.

“The flower child movement degenerated into being fashionable – that was the negative,” he said.

Burgess says although he enjoys being involved in the general environmental movement, his students are his first priority.

He said he tries to relate to his students on a personal level because he is eager for his students to develop their own appreciation of nature so that they will carry on and encourage the “green movement.”

Students say Burgess knows his students inside and out, just like the plants he studies. He recognizes the naturalistic tendencies in his students and says his role as a professor is to teach his students to be more comfortable with their own skills.

Burgess says he knows a true naturalist when he sees one.

“A naturalist is someone who is comfortable with complexity, has a bright mind and an empathetic heart,” he said. “A naturalist relates to nature emotionally and intellectually.”

Burgess has helped train countless aspiring biologists and wildlife specialists. Students say his style of integrated field and lab teaching sets him apart from other professors.

“He is one of the most encouraging teachers I have ever had,” Byrd said. “He is quick to recognize achievement, no matter how small.”

Burgess says the best advice he gives his students is to follow their passion – a lesson he learned from his own mentors.

“Have faith that if you follow your passion, doors will open,” he says.